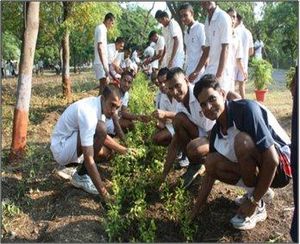 Where it comes from

The words "carbon footprint" are often seen in the news. They are used with the word sustainability, which means that we can keep doing something without making something bad happen. That is, if there is too much of a carbon footprint, then there is no sustainability. People and businesses are often asked to think about how much carbon they are putting into the air, and how this changes the environment and maybe causes global warming. This is often said about traveling by airplane or by car, because burning fuel makes carbon dioxide gas.

The most common way to reduce the carbon footprint of humans is to Reduce, Reuse, Recycle, Refuse. Another easy option is to drive less. By walking or biking to the destination rather than driving, not only is a person going to save money on gas, but they will be burning less fuel and releasing fewer emissions into the atmosphere. However, if walking is not an option, one can look into carpooling use public transportation options in their area. Yet another option for reducing the carbon footprint of humans is to use less air conditioning and heating in the home. By adding insulation to the walls and attic of one's home, and installing weather stripping or caulking around doors and windows one can lower their heating costs more than 25 percent. Choice of diet is a major influence on a person's carbon footprint. Animal sources of protein (especially red meat), rice (typically produced in high methane-emitting paddies), foods transported long distance and/or via fuel-inefficient transport (e.g., highly perishable produce flown long distance) and heavily processed and packaged foods are among the major contributors to a high carbon diet.

All content from Kiddle encyclopedia articles (including the article images and facts) can be freely used under Attribution-ShareAlike license, unless stated otherwise. Cite this article:
Carbon footprint Facts for Kids. Kiddle Encyclopedia.