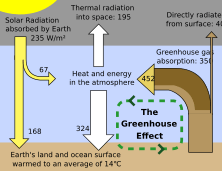 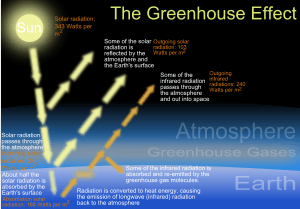 The greenhouse effect occurs when certain gases in the Earth's atmosphere (the air around the Earth) trap infrared radiation. This makes the planet become warmer, similar to the way it makes a greenhouse become warmer.

The problem is that recently, the greenhouse effect has become stronger. This is because humans have been using large amounts of fossil fuels, which release carbon dioxide when they are burned. Since carbon dioxide is a greenhouse gas, it has caused the planet to warm over the past 150 years.

About 10,000 years ago, before people started burning large amounts of fossil fuels, there were 260 to 280 parts per million (ppm) of carbon dioxide (CO2) in the atmosphere, but now there is over 400 ppm. Most scientists say that having 350 ppm or less is safe for the environment and that species on the planet can adapt to this level. Higher levels can make severe problems for animal and marine life that are already being seen today, such as ocean acidification.

The greenhouse effect was first proposed by Joseph Fourier in 1824. Mars, Venus and other planets with atmospheres also have greenhouse effects. The effect on Venus is especially strong because Venus has so much CO2. This is why Venus is hotter than Mercury, even though Mercury is closer to the sun. The first person to predict that carbon dioxide from the burning of fossil fuels (and other combustion processes) could cause global warming was Svante Arrhenius.

All content from Kiddle encyclopedia articles (including the article images and facts) can be freely used under Attribution-ShareAlike license, unless stated otherwise. Cite this article:
Greenhouse effect Facts for Kids. Kiddle Encyclopedia.