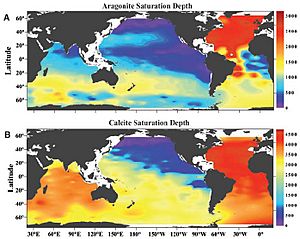 When carbon dioxide enters the oceans, it makes it more acidic.

The skeletons and shells of many sea animals need what is known as calcium carbonate minerals. Due to ocean acidification, there are fewer of these minerals and there are species that could no longer produce or keep their shells. With more carbon dioxide in the ocean, this problem becomes worse and many species will be at risk. As a result, if humans continue to emit greenhouse gases into the atmosphere, ocean life will be in severe danger. Also, coral is at risk, as it is being eroded by the acid in the ocean.

All content from Kiddle encyclopedia articles (including the article images and facts) can be freely used under Attribution-ShareAlike license, unless stated otherwise. Cite this article:
Ocean acidification Facts for Kids. Kiddle Encyclopedia.