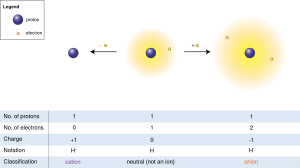 When hydrogen loses its electron, the cations can be formed:

The ions produced by the reaction of these cations with water, as well as their hydrates, are also called 'hydrogen ions'.

In connection with acids, "hydrogen ions" usually refers to hydrons.

Hydrogen anions are formed when additional electrons are acquired:

All content from Kiddle encyclopedia articles (including the article images and facts) can be freely used under Attribution-ShareAlike license, unless stated otherwise. Cite this article:
Hydrogen ion Facts for Kids. Kiddle Encyclopedia.