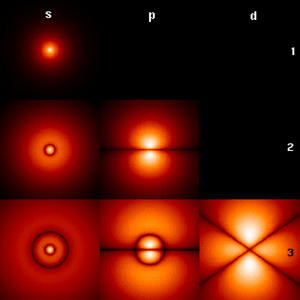 Probability densities through the xz-plane for the electron at different quantum numbers (ℓ, across top; n, down side; m = 0)

A hydrogen atom is an atom of the chemical element hydrogen.

Its parts are a single negatively-charged electron that circles a single positively-charged nucleus of the hydrogen atom. The nucleus of hydrogen consists of only a single proton (in the case of hydrogen-1 or protium), or it may also include one or more neutrons (giving deuterium, tritium, and other isotopes). The electron is bound to the nucleus by the Coulomb force. Hydrogen-1, also known as protium or "light hydrogen" is the main component of natural hydrogen.

All content from Kiddle encyclopedia articles (including the article images and facts) can be freely used under Attribution-ShareAlike license, unless stated otherwise. Cite this article:
Hydrogen atom Facts for Kids. Kiddle Encyclopedia.