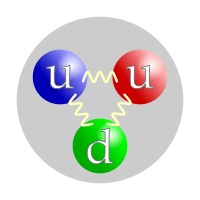 A proton is part of an atom. They are found in the nucleus of an atom along with neutrons. The periodic table groups atoms according to how many protons they have. A single atom of hydrogen (the lightest kind of atom) is made up of an electron moving around a proton. Most of the mass of this atom is in the proton, which is almost 2000 times heavier than the electron. Protons and neutrons make up the nucleus of every other kind of atom. In any one element, the number of protons is always the same. An atom's atomic number is equal to the number of protons in that atom.

Protons are made of quarks. A proton is believed to be made up of 3 quarks, two up quarks and one down quark. One down quark has a charge of -1/3, and two up quarks have a charge of +2/3 each. This adds to a charge of +1. A proton has a very small mass. The mass of the proton is about one atomic mass unit. The mass of the neutron is also about one atomic mass unit. The size of a proton is determined by the vibration of the quarks that are in it, and these quarks effectively form a cloud. This means that a proton is not so much a hard ball as an area that contains quarks.

The concept of a hydrogen-like particle as a constituent of other atoms was developed over a long period. As early as 1815, William Prout proposed that all atoms are composed of hydrogen atoms (which he called "protyles"), based on a simplistic interpretation of early values of atomic weights (see Prout's hypothesis), which was disproved when more accurate values were measured. 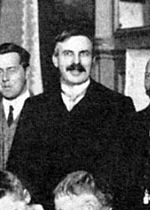 In 1886, Eugen Goldstein discovered canal rays (also known as anode rays) and showed that they were positively charged particles (ions) produced from gases. However, since particles from different gases had different values of charge-to-mass ratio (e/m), they could not be identified with a single particle, unlike the negative electrons discovered by J. J. Thomson. Wilhelm Wien in 1898 identified the hydrogen ion as particle with highest charge-to-mass ratio in ionized gases.

Following the discovery of the atomic nucleus by Ernest Rutherford in 1911, Antonius van den Broek proposed that the place of each element in the periodic table (its atomic number) is equal to its nuclear charge. This was confirmed experimentally by Henry Moseley in 1913 using X-ray spectra.

In 1917 (in experiments reported in 1919 and 1925), Rutherford proved that the hydrogen nucleus is present in other nuclei, a result usually described as the discovery of protons. These experiments began after Rutherford had noticed that, when alpha particles were shot into air (mostly nitrogen), his scintillation detectors showed the signatures of typical hydrogen nuclei as a product. After experimentation Rutherford traced the reaction to the nitrogen in air and found that when alpha particles were introduced into pure nitrogen gas, the effect was larger. In 1919 Rutherford assumed that the alpha particle knocked a proton out of nitrogen, turning it into carbon. After observing Blackett's cloud chamber images in 1925, Rutherford realized that the opposite was the case: after capture of the alpha particle, a proton is ejected, so that heavy oxygen, not carbon, is the end result i.e. Z is not decremented but incremented. This was the first reported nuclear reaction, 14N + α → 17O + p. Depending on one's perspective, either 1919 or 1925 may be regarded as the moment when the proton was 'discovered'.

Rutherford knew hydrogen to be the simplest and lightest element and was influenced by Prout's hypothesis that hydrogen was the building block of all elements. Discovery that the hydrogen nucleus is present in all other nuclei as an elementary particle led Rutherford to give the hydrogen nucleus a special name as a particle, since he suspected that hydrogen, the lightest element, contained only one of these particles. He named this new fundamental building block of the nucleus the proton, after the neuter singular of the Greek word for "first", πρῶτον. However, Rutherford also had in mind the word protyle as used by Prout. Rutherford spoke at the British Association for the Advancement of Science at its Cardiff meeting beginning 24 August 1920. Rutherford was asked by Oliver Lodge for a new name for the positive hydrogen nucleus to avoid confusion with the neutral hydrogen atom. He initially suggested both proton and prouton (after Prout). Rutherford later reported that the meeting had accepted his suggestion that the hydrogen nucleus be named the "proton", following Prout's word "protyle". The first use of the word "proton" in the scientific literature appeared in 1920.

Recent research has shown that thunderstorms can produce protons with energies of up to several tens of MeV.

Protons are routinely used for accelerators for proton therapy or various particle physics experiments, with the most powerful example being the Large Hadron Collider.

All content from Kiddle encyclopedia articles (including the article images and facts) can be freely used under Attribution-ShareAlike license, unless stated otherwise. Cite this article:
Proton Facts for Kids. Kiddle Encyclopedia.