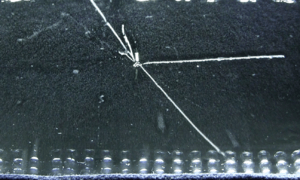 Alpha particles from a Radium source in a cloud chamber 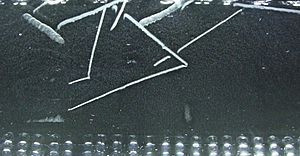 Radon220 decay in a cloud chamber 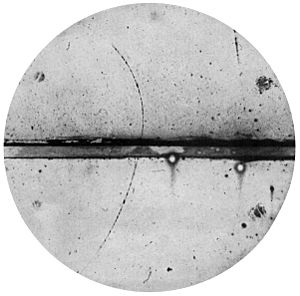 Cloud chamber photograph of the first positron ever observed

A cloud chamber is a sealed box with a supersaturated vapour of water or alcohol. When a charged particle (e.g. an alpha or beta particle) goes through it, the vapour is ionized. The resulting ions act as nuclei, around which a mist forms from the vapour.

The high energies of alpha and beta particles mean that a trail is left by ions produced along the path of the charged particle. These tracks have distinctive shapes (for example, an alpha particle's track is broad and shows more evidence of deflection by collisions, while an electron's is thinner and straight). When any uniform magnetic field is applied across the cloud chamber, positively and negatively charged particles will curve in opposite directions, according to the Lorentz force law.

The cloud chamber was invented by Charles Wilson (1869–1959), a Scottish physicist who received the Nobel Prize in Physics in 1927 for this work. The first cloud chamber was made in 1911. The invention was used in the early days of atomic physics. It is often called the 'Wilson chamber'. Since then a number of other types of particle detectors have been invented.

All content from Kiddle encyclopedia articles (including the article images and facts) can be freely used under Attribution-ShareAlike license, unless stated otherwise. Cite this article:
Cloud chamber Facts for Kids. Kiddle Encyclopedia.