When placed in a magnetic field, magnetic dipoles are in one line with their axes to be parallel with the field lines, as can be seen when iron filings are in the presence of a magnet. Magnetic fields also have their own energy and momentum, with an energy density proportional to the square of the field intensity. The magnetic field is measured in the units of teslas (SI units) or gauss (cgs units).

There are some notable specific kinds of the magnetic field. For the physics of magnetic materials, see magnetism and magnet, and more specifically diamagnetism. For magnetic fields made by changing electric fields, see electromagnetism.

The law of electromagnetism was founded by Michael Faraday. 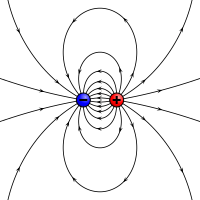 In the magnetic pole model, the elementary magnetic dipole m is formed by two opposite magnetic poles of pole strength qm separated by a very small distance d, such that m = qm d.

All content from Kiddle encyclopedia articles (including the article images and facts) can be freely used under Attribution-ShareAlike license, unless stated otherwise. Cite this article:
Magnetic field Facts for Kids. Kiddle Encyclopedia.