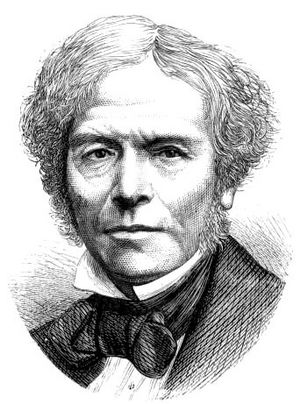 Michael Faraday from a photograph by John Watkins, British Library

Michael Faraday (Newington Butts, Surrey, 22 September 1791 – Hampton Court, Surrey, 25 August 1867) was an English chemist and physicist. He was a Fellow of the Royal Society, and was awarded the Royal, Copley and Rumford medals of the Society.

Although Faraday had little school education, and did not know higher mathematics, he became one of the most influential scientists in history. For the most part, he was an autodidact: he taught himself. Faraday became the greatest experimental physicist of the nineteenth century.

He showed that magnetism is able to affect rays of light, as there is an underlying relationship between the two phenomena. His inventions of electromagnetic rotary devices formed the foundation of electric motor technology, and it was largely due to his efforts that electricity became viable for use in technology. He made the first electric motor. It is thanks to his early work that the electricity has been made into a useful thing today.

As a chemist, Michael Faraday discovered benzene, invented an early type of Bunsen burner and popularized terminology such as anode, cathode, electrode and ion. Faraday was the first Fullerian Professor of Chemistry at the Royal Institution of Great Britain, a position to which he was appointed for life. He was also the Director of the Royal Institution after Sir Humphrey Davy.

Albert Einstein kept a photograph of Faraday on his study wall alongside pictures of Isaac Newton and James Clerk Maxwell.

Michael Faraday was born in Surrey, England (well, it says Newington Butts, England on normal Wikipedia). His family was poor. His father, James, was a blacksmith. James Faraday had come to London in the 1780s from North-West England. The young Michael Faraday was one of four children and only had the most basic school education. He had to teach himself to read and write. At fourteen he went to learn how to be a bookbinder and bookseller from a man called George Riebau.

During his seven-year study of making books with Riebau, he read many books. He read Isaac Watts's The improvement of the mind. Faraday loved to use the ideas in this book in his work. He started to become interested in science, especially in electricity. He began to attend public lessons run by the best scientists in London at the time. He showed the notes he made to the great chemist Sir Humphrey Davy. Davy liked him and offered him a job as an assistant in March 1813.

Faraday's knowledge continued to grow as he helped Sir Humphrey Davy until he was making new discoveries on his own. He was eventually made a professor in 1833. The importance of his work was seen within his own lifetime and the British government gave him a pension in his old age as a reward.

Faraday also discovered that if electricity strikes a metal object, it will only pass through the outside of the object. The inside is unaffected by the electricity. This is what keeps the people inside safe when lightning strikes a car or a plane. This is now called Faraday's Cage.

All content from Kiddle encyclopedia articles (including the article images and facts) can be freely used under Attribution-ShareAlike license, unless stated otherwise. Cite this article:
Michael Faraday Facts for Kids. Kiddle Encyclopedia.