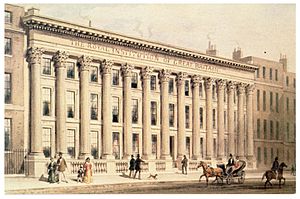 The Royal Institution building on Albermarle Street, London, circa 1838 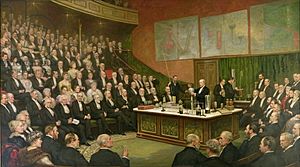 The Royal Institution was founded in 1799 by the leading British scientists of the age, including Henry Cavendish. Its purpose was to:

"diffuse the knowledge, and facilitate the general introduction, of useful mechanical inventions and improvements; and for teaching, by courses of philosophical lectures and experiments, the application of science to the common purposes of life".

All content from Kiddle encyclopedia articles (including the article images and facts) can be freely used under Attribution-ShareAlike license, unless stated otherwise. Cite this article:
Royal Institution Facts for Kids. Kiddle Encyclopedia.