Sir James Dewar FRS FRSE (20 September 1842 – 27 March 1923) was a Scottish chemist and physicist. He is best known for his invention of the vacuum flask, which he used in conjunction with research into the liquefaction of gases. He also studied atomic and molecular spectroscopy, working in these fields for more than 25 years.

James Dewar was born in Kincardine, Perthshire (now in Fife) in 1842, the youngest of six boys of Ann Dewar and Thomas Dewar, a vintner. He was educated at Kincardine Parish School and then Dollar Academy. His parents died when he was 15. He attended the University of Edinburgh where he studied chemistry under Lyon Playfair (later Baron Playfair), becoming Playfair's personal assistant. Dewar also studied under August Kekulé at Ghent.

In 1875, Dewar was elected Jacksonian professor of natural experimental philosophy at the University of Cambridge, becoming a fellow of Peterhouse. He became a member of the Royal Institution and later, in 1877, replaced Dr John Hall Gladstone in the role of Fullerian Professor of Chemistry. Dewar was also the President of the Chemical Society in 1897 and the British Association for the Advancement of Science in 1902, as well as serving on the Royal Commission established to examine London's water supply from 1893 to 1894 and the Committee on Explosives. While serving on the Committee on Explosives, he and Frederick Augustus Abel developed cordite, a smokeless gunpowder alternative.

In 1867 Dewar described several chemical formulas for benzene. One of the formulae, which does not represent benzene correctly and was not advocated by Dewar, is sometimes still called Dewar benzene. In 1869 he was elected a Fellow of the Royal Society of Edinburgh, his proposer being his former mentor, Lyon Playfair.

His scientific work covers a wide field – his earlier papers cover topics including organic chemistry, hydrogen and its physical constants, high-temperature research, the temperature of the Sun and of the electric spark, spectrophotometry, and the chemistry of the electric arc.

With Professor J. G. McKendrick, of the University of Glasgow, he investigated the physiological action of light and examined the changes that take place in the electrical condition of the retina under its influence. With Professor G. D. Liveing, one of his colleagues at the University of Cambridge, he began in 1878 a long series of spectroscopic observations, the later of which were devoted to the spectroscopic examination of various gaseous elements separated from atmospheric air by the aid of low temperatures. He was joined by Professor J. A. Fleming, of University College London, in the investigation of the electrical behaviour of substances cooled to very low temperatures. 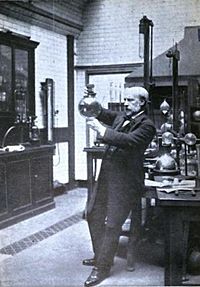 His name is most widely known in connection with his work on the liquefaction of the so-called permanent gases and his researches at temperatures approaching absolute zero. His interest in this branch of physics and chemistry dates back at least as far as 1874, when he discussed the "Latent Heat of Liquid Gases" before the British Association. In 1878, he devoted a Friday evening lecture at the Royal Institution to the then-recent work of Louis Paul Cailletet and Raoul Pictet, and exhibited for the first time in Great Britain the working of the Cailletet apparatus. Six years later, again at the Royal Institution, he described the researches of Zygmunt Florenty Wróblewski and Karol Olszewski, and illustrated for the first time in public the liquefaction of oxygen and air. Soon afterward, he built a machine from which the liquefied gas could be drawn off through a valve for use as a cooling agent, before using the liquid oxygen in research work related to meteorites; about the same time, he also obtained oxygen in the solid state. 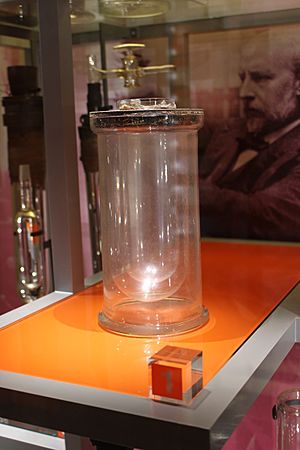 Dewar's vacuum flask in the museum of the Royal Institution

By 1891, he had designed and built, at the Royal Institution, machinery which yielded liquid oxygen in industrial quantities, and towards the end of that year, he showed that both liquid oxygen and liquid ozone are strongly attracted by a magnet. About 1892, the idea occurred to him of using vacuum-jacketed vessels for the storage of liquid gases – the Dewar flask (otherwise known as a Thermos or vacuum flask) – the invention for which he became most famous. The vacuum flask was so efficient at keeping heat out, it was found possible to preserve the liquids for comparatively long periods, making an examination of their optical properties possible. Dewar did not profit from the widespread adoption of his vacuum flask – he lost a court case against Thermos concerning the patent for his invention. While Dewar was recognised as the inventor, because he did not patent his invention no way to stop Thermos from using the design was possible.

He next experimented with a high-pressure hydrogen jet by which low temperatures were realised through the Joule–Thomson effect, and the successful results he obtained led him to build at the Royal Institution a large regenerative cooling refrigerating machine. Using this machine in 1898, liquid hydrogen was collected for the first time, solid hydrogen following in 1899. He tried to liquefy the last remaining gas, helium, which condenses into a liquid at −268.9 °C, but owing to a number of factors, including a short supply of helium, Dewar was preceded by Heike Kamerlingh Onnes as the first person to produce liquid helium, in 1908. Onnes would later be awarded the Nobel Prize in Physics for his research into the properties of matter at low temperatures – Dewar was nominated several times, but never succeeded in winning the Nobel Prize.

In 1905, he began to investigate the gas-absorbing powers of charcoal when cooled to low temperatures and applied his research to the creation of high vacuum, which was used for further experiments in atomic physics. Dewar continued his research work into the properties of elements at low temperatures, specifically low-temperature calorimetry, until the outbreak of World War I. The Royal Institution laboratories lost a number of staff to the war effort, both in fighting and scientific roles, and after the war, Dewar had little interest in restarting the serious research work that went on before the war. Shortages of scholars necessarily compounded the problems. His research during and after the war mainly involved investigating surface tension in soap bubbles, rather than further work into the properties of matter at low temperatures.

He married Helen Rose Banks in 1871. They had no children. 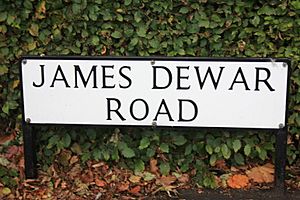 In the Kings Buildings complex in Edinburgh

Whilst Dewar was never recognised by the Swedish Academy, he was recognised by many other institutions both before and after his death, in Britain and overseas. The Royal Society elected him a Fellow of the Royal Society in June 1877 and bestowed their Rumford (1894), Davy (1909), and Copley Medal (1916) medals upon him for his work, as well as inviting him to deliver their Bakerian Lecture in 1901. In 1899, he became the first recipient of the Hodgkins gold medal of the Smithsonian Institution, Washington, DC, for his contributions to knowledge of the nature and properties of atmospheric air.

A street within the Kings Buildings complex of the University of Edinburgh was named in memory of Dewar in the early 21st century. 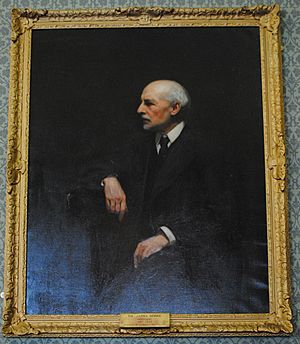 Portrait by René le Brun, Comte de L'Hôpital, in the collection of the Royal Society of Chemistry

All content from Kiddle encyclopedia articles (including the article images and facts) can be freely used under Attribution-ShareAlike license, unless stated otherwise. Cite this article:
James Dewar Facts for Kids. Kiddle Encyclopedia.