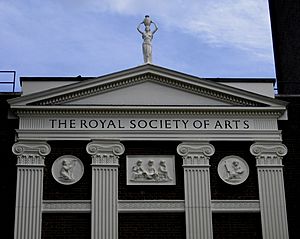 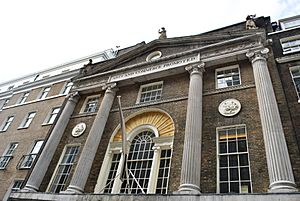 Royal Society of Arts, front of the building

The Royal Society for the encouragement of Arts, Manufactures and Commerce (RSA) is a British multi-disciplinary institution, based in London. It is often called the Royal Society of Arts instead of by its long formal name. The front of the building uses the short name too — see photograph. It was founded in 1754 and was granted a Royal Charter in 1847. Notable members have included Benjamin Franklin, Karl Marx, Adam Smith, William Hogarth, John Diefenbaker, Stephen Hawking and Charles Dickens.

The RSA was set up to "embolden enterprise, enlarge science, refine art, improve our manufactures and extend our commerce", but also to reduce poverty and secure full employment.

The RSA was founded in 1754 by William Shipley as the Society for the Encouragement of Arts, Manufactures and Commerce, modelled on the Dublin Society for improving Husbandry, Manufactures and other Useful Arts. In 1774, it moved into a new building near the Strand in central London which had been purpose-designed by the Adam Brothers (James Adam and Robert Adam) as part of their Adelphi scheme. The address was 8 John Street (now 8 John Adam Street). The RSA is still in there, but it also occupies nearby buildings (2-6 John Adam Street, plus 18 Adam Street). The original building includes the Great Room, which features a magnificent sequence of paintings by Irish artist James Barry: The progress of human knowledge and culture. The first occupant of 18 Adam Street was the Adelphi Tavern, which is mentioned in Dickens's The Pickwick Papers. The former private dining room of the Tavern contains a magnificent Adam ceiling with painted roundels by the school of Kauffman and Zucchi.

In its early years, the Society offered prizes — which it called "premiums" — for people who could successfully achieve one of a number of published challenges. Captain William Bligh suffered the Mutiny on the Bounty while attempting to win a premium for shipping breadfruit from the East to the West Indies. He tried again and this time succeeded, and the Society awarded him the prize. The Society offered premiums for a very wide range of challenges including inventing new forms of machinery and agricultural improvements (which included seeking ways to improve the cultivation of opium poppies).

The RSA hosted Britain's first exhibition of contemporary art which was a big success. As a result, the Royal Academy of Arts was formed in 1768 by Sir Thomas Gainsborough and Sir Joshua Reynolds — two early members of the RSA — as a spin-off organisation.

The National Training School for Music in London was founded by the Society in 1876. This was later succeeded by the Royal College of Music.

The RSA is probably best known for creating the RSA Examinations Board, now part of the separate OCR (Oxford, Cambridge and RSA Examinations) Board, following the Society's launch of the modern world's first public examinations in 1882.

It devised a scheme for remembering the links between famous people and buildings by placing plaques on the walls — these continue today as "Blue Plaques" which are administered by a range of government bodies. The first of these plaques was, in fact, of red terracotta placed on the outside of a former home of Lord Byron (since demolished). The Society erected 36 plaques until, in 1901, responsibility for them was transferred to the London County Council (which changed the colour of the plaques to the current blue) and later the Greater London Council and most recently English Heritage. Similar schemes are now operated in all the constituent countries of the United Kingdom.

The Society was instrumental in the preservation of West Wycombe, purchasing the entire village and handing it over the National Trust.

In 1936, the RSA awarded the first distinctions of Royal Designers for Industry (RDI or HonRDI). The honour gained royal endorsement in 1936, and "The Faculty of Royal Designers for Industry" was established as an association in 1937 to "further excellence in design and its application to industrial purposes": membership of the Faculty is automatic for (and exclusive to) all RDIs and HonRDIs. The Faculty currently has 120 Royal Designers (RDI) and 45 Honorary Royal Designers (non-UK citizens can be HonRDI): the number of designers who may hold the distinction of RDI at any one time is strictly limited. The Faculty consists of the world’s leading practitioners from fields as disparate as engineering, furniture, fashion and textiles, graphics, theatre and movie design. Early members include Eric Gill, Enid Marx, Sir Frank Whittle and numerous other household names.

An example of the Society's success is offered by the Oxford English Dictionary, which records the first use of the word "sustainability" in an environmental sense in the RSA's Journal in 1980.

The Society states that, 'Fellows attach the letters FRSA after their name'. Membership of the fellowship is considered an honour.

This was not, however, always the case. According to Sutherland Lyall in 2003, 'the Royal Society of Arts used to ask you not to use [the suffix FRSA] because anybody who pays the modest fee becomes a Fellow'. Being elected a Fellow currently depends on having achieved (or demonstrating the potential to achieve) a contribution to society in a cultural or arts-related sphere.

The organisation is Incorporated by Royal Charter, is registered as a charity in England, and has more than 27,000 Fellows living in around 70 countries who support the aims of the society, and who have achieved — or who have the potential to achieve — eminence in their profession or calling. Its Patron is currently HM Queen Elizabeth II, its President is HRH The Princess Royal (who replaced her father, HRH Prince Philip in 2011), its Chairman is Luke Johnson (businessman) and its Chief Executive is Matthew Taylor.

Each year a number of medals are awarded, including the Albert Medal, the Benjamin Franklin Medal, and the Bicentenary Medal. Medal winners include Nelson Mandela, Sir Frank Whittle and Professor Stephen Hawking.

In Great Britain and Ireland, the RSA has offered some regional activities to encourage Fellows to interact with each other locally and to address local topics of interest. The UK Regions are: East of England, East Midlands, London, North East, North West, Scotland, South East, South West, Wales, West, West Midlands and Yorkshire; Northern Ireland, part of the UK, is treated, for historical reasons, as a single all-Ireland region — 'Ireland' — that includes the Republic of Ireland. The RSA also has a presence in Belgium (to increase its influence in Brussels) and, further afield, in Australia, India, Southern Africa and the USA.

The choice of speaker for the recent annual Presidential lecture has been a matter of interest in the press. Danish professor Björn Lomborg, was chosen; his latest book, Cool It, suggests that the imminent demise of polar bears is a myth. As president of the RSA, Prince Philip's first choice of speaker was Ian Plimer, professor of mineral geology at Adelaide University, but this was rejected as too controversial, as Plimer argues that the theory of Anthropogenic Global Warming is unproven.

On January 14, 2010, the RSA in partnership with Arts Council England hosted a one-day conference in London called "State of the Arts". A number of speakers from various dispclines from art to government gathered to talk about the state of the arts industry in the United Kingdom. Notable speakers included Jeremy Hunt MP, Secretary of State for Culture, Media & Sport and his counterpart Ben Bradshaw MP, who was then the Secretary of State for Culture, Media & Sport. Notably, Jeremy Hunt stated that if the Conservative party won the next elections then government funding for the arts would be cut.

The RSA House is also available to hire by external clients, providing hospitality facilities for conferences, dinners, parties and weddings. The stunning Vaults are of significant interest and provide a unique space for entertaining.

In July 2008, the RSA became a sponsor of an academy in Tipton, The RSA Academy, which opened in September 2008. New buildings are currently under construction to designs by John McAslan and Partners.

Past projects include delivering fresh drinking water to the developing world, rethinking intellectual property from first principles to produce a Charter (published as the Adelphi Charter), investigating schemes to manage international migration and exploring the feasibility of a UK-wide personal carbon trading system. It still promotes the practice of inclusive design, and is working with artists to communicate ideas about environmental sustainability (for example, through one of the RSA's past projects, WEEE Man, and currently through the Arts and Ecology project).

All content from Kiddle encyclopedia articles (including the article images and facts) can be freely used under Attribution-ShareAlike license, unless stated otherwise. Cite this article:
Royal Society of Arts Facts for Kids. Kiddle Encyclopedia.