Historically within Staffordshire, Tipton was an urban district until 1938, when it became a municipal borough. The vast majority of the Borough of Tipton was transferred into West Bromwich County Borough in 1966, although parts of the old borough were absorbed into an expanded Dudley borough and the newly created County Borough of Warley. Along with the rest of West Bromwich and Warley, Tipton became part of the Sandwell Metropolitan Borough in 1974 and remains within this local authority to this day.

Tipton was once one of the most heavily industrialised towns in the Black Country, with thousands of people employed in different sections of the town's industries, but most of its factories have closed since the 1970s and it has gradually developed into a commuter town occupied mostly by people working in other parts of the region. 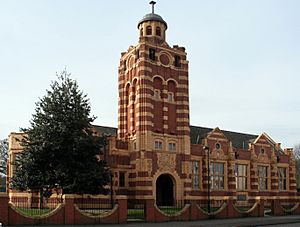 Grade II listed Tipton District Library, which was built in 1905 but has not been used as a library since the service was moved to a new site in the town centre in 2000

The town of Tipton was originally called Tibintone and recorded as such in the Domesday Book, the oldest surviving public record that provides information about the 1086 Domesday survey. The present spelling of Tipton derives from the 16th century.

Until the 18th century, Tipton was a collection of small hamlets. Industrial growth started in the town when ironstone and coal were discovered in the 1770s. A number of canals were built through the town and later railways, which greatly accelerated the pace of industrialisation.

James Watt built his first steam engine in or very near Tipton in the 1770s, which was used to pump water from the mines. In 1780, James Keir and Alexander Blair set up a chemical works there, making vast quantities of alkali and soap.

From details of the 1801 census, it records 834 houses with 872 families living in Tipton. Only 46 houses are stated as being empty. An adult population of 4,280 is also recorded with males numbered at 2,218 and slightly fewer females at 2,062. Iron making and mining were the main employment for the population. Trades and manufacturing provided work for 1,740 people and other jobs totalled 2,484. It is noted that between Tipton and Dudley there were a few farms listed which gave employment to 56 people.

The massive expansion in iron and coal industries led to the population of Tipton expanding rapidly through the 19th century, going from 4,000 at the beginning of the century to 30,000 at the end. because chimneys of local factories belched heavy pollution into the air, whilst houses and factories were built side by side. Most of the traditional industries which once dominated the town have since disappeared.

The Black Country Living Museum in nearby Dudley re-creates life in the early 20th century Black Country, in original buildings which have been painstakingly rebuilt and furnished, many of them being transported from - or based on - sites originally located in Tipton. There is a residential canal basin at the museum, reflecting Tipton's former status in popular local culture as the Venice of the Midlands due to its extensive network of canals, although some of town's canals were infilled during the 1960s and 1970s. The towpaths of the remaining canals today form a vital cycling, wildlife and leisure facility.

The landscape of Tipton began to change further from the late 1920s when new housing estates were built by the town's council, in response to the growing need to replace slum housing. Among the first council estates to be built were the Shrubbery Estate at Tipton Green, the Tibbington Estate at Princes End, the Moat Farm Estate at Ocker Hill (which earned the nickname "Lost City" due to its isolated location) and the Cotterill's Farm Estate between Princes End and Great Bridge. Private houses were also built on smaller developments around the same time. However, the "Lost City" has since been integrated with the rest of Tipton as newer housing developments have sprung up around it.

During World War II (1939–1945), there were a number of air raids on the town. On 19 November 1940, three people were killed by a Luftwaffe bomb which was dropped in Bloomfield Road and destroyed several buildings including The Star public house; this was rebuilt after the war but demolished in 1996.

Just before Christmas in 1940, an anti-aircraft shell fired from the hills at Rowley Regis fell down the chimney of The Boat Inn, Dudley Road East, Tividale; fatally injuring 12 people at a wedding reception (including the bride, while the groom lost both legs) as well as the resident of an adjacent house.

On 17 May 1941, six people died in an air raid in New Road, Great Bridge. The Tipton Tavern and New Road Methodist Church was destroyed and a number of nearby houses were damaged. Tipton Tavern landlord Roger Preece was trapped in the rubble but survived with minor injuries. The Tipton Tavern was rebuilt in the 1950s and became the Hallbridge Arms during the 1990s and more recently became the Pearl Girl, the world's first licensed pearl bar.

The first major council housing estates built in Tipton during the early postwar years and into the 1950s included the Glebefields Estate at Princes End and the southern extension to the Tibbington Estate. The Glebefields Estate was further expanded in the 1960s, with a canal being infilled to make way for its construction. Smaller council housing developments were built in redeveloped older areas including Dudley Port and Princes End. The last major private housing development to be built in the Municipal Borough of Tipton was the Foxyards Estate, on land straddling the borders with Dudley and Coseley, in the mid 1960s.

Until 1966, the town had its own council. The Urban District Council of Tipton was formed in 1894 but received County Borough status in 1938.

The headquarters were originally based in a 19th-century building on Owen Street until 1935 when it relocated to the former Bean offices site on Sedgley Road West, straddling the border with Coseley. The council remained at that site for the next 31 years, until the dissolution of the borough council in April 1966. The building was later taken over by Dudley College, who retained it until 1993. It has since been occupied by various businesses and training scheme providers.

The bulk of the Tipton borough was absorbed into an expanded West Bromwich borough, although a fragment of the town near the border with Coseley (including the former council offices and the bulk of the new Foxyards housing estate) was absorbed into Dudley and most of the Tividale area became part of the new County Borough of Warley. In this reorganisation, the township of Tipton was expanded around Princes End to take over a section of the former Coseley urban district.

Since 1974, Tipton has been part of the Metropolitan Borough of Sandwell, which was created by a merger of the former West Bromwich and Warley boroughs.

By the end of the 1970s, most of the housing in Tipton built before 1890 had been demolished. Owen Street, the town's main shopping area, was redeveloped between 1979 and 1982, with a reduced number of shop units as well as new low-rise council houses and flats.

Tipton's first gasworks was opened in 1958 and redeveloped as a state-of-the-art Naphta Gas plant by 1965, but owing to the emergence of North Sea gas, the gasworks closed in 1975 and stood empty for a decade before demolition. The site of the gas plant was redeveloped as the Standbridge Park housing estates in the 1990s.

In 1956, one of Britain's first comprehensive schools, Tividale Comprehensive School, was opened in Tipton near the border with Oldbury, in the area which became part of Warley a decade later and was not included in the modern Tipton DY4 postal district.

Tipton has two railway stations, the main railway station at Owen Street and another station at Dudley Port. There were several other stations in the town on three different railway lines, but these were gradually closed between 1916 and 1964 as passenger trains were phased out on these lines. The Dudley-Wolverhampton railway line, which straddled Tipton's border with Coseley, closed in 1968. The Princes End Branch Line, which was only two miles long, closed in 1981. The South Staffordshire Line through Tipton, which led to Walsall northwards and Dudley southwards, closed in 1993 but is scheduled to re-open at some point in the future to goods trains and light passenger trains.

The archive collection for Tipton Borough is held at Sandwell Community History and Archives Service.

Tipton was one of the key towns in the Industrial Revolution of the 19th century, and even during the 18th century it had established its first key industries. This included the world's first successful steam pumping engine, which was erected at Conygre Coalworks in 1712 by industrialist Thomas Newcomen. A full-size replica of the engine now exists at the Black Country Living Museum just over Tipton's borders in Dudley.

In 1800, it was a predominantly rural area with just a few coal mines and some 4,000 residents. However, mass building of factories and digging of coal mines took place, and resulted in Tipton becoming a heavily built-up and industrialised area with more than 30,000 residents by the end of the 19th century. The town's population grew further in the 20th century as new housing developments, mostly by the local council but with a significant number in the private sector, took place. Local industry also expanded further during this time.

In 1840, the Batson family established a lubricant blending plant to serve the local industries at the junction of High Street and Dudley Road. The site is still operational today, owned by German refiner H&R AG, although the original buildings have long since been replaced.

However, coal mining had disappeared from Tipton by the mid-20th century, and the town lost a large percentage of its factories during the recessions of the 1970s and 1980s, which contributed to a rise in unemployment and poverty in the Tipton, although living conditions continued to improve.

Bean Cars, a company that manufactured cars and lorry engines and other vehicle parts, had a factory in Tipton

Further industrial sites have been abandoned since the 1970s, paving the way for mass private house building on the land previously occupied by factories. This includes the town's naphtha gas plant, which opened in 1965 but closed just 10 years later due to the emergence of natural gas from the North Sea. The gasworks stood abandoned for about a decade afterwards, when it was finally demolished. Standeridge Park housing estate was built on its site during the 1990s. By the late 2000s, most of the town's large factories had closed.

Tipton gains its name from the Anglo-Saxon name 'Tibba' followed by 'Tun', the Old English word for farm or settlement. It is written as 'Tibintone' in the Domesday Book.

The area is notable for being the location of filming for the British comedy film Anita and Me, set in the 1970s.

All content from Kiddle encyclopedia articles (including the article images and facts) can be freely used under Attribution-ShareAlike license, unless stated otherwise. Cite this article:
Tipton Facts for Kids. Kiddle Encyclopedia.