Kids Encyclopedia Facts
This page is about the town in England. For the Bilston in Scotland, see Bilston, Midlothian.

Bilston is a market town, ward, and civil parish located in Wolverhampton, West Midlands, England. It is close to the borders of Sandwell and Walsall. The nearest towns are Darlaston, Wednesbury, and Willenhall. Historically in Staffordshire, three wards of Wolverhampton City Council now cover the town: Bilston East and Bilston North, which almost entirely comprise parts of the historic Borough of Bilston, and Ettingshall, which comprises a part of Bilston and parts of Wolverhampton.

Bilston was first referred to in AD 985 as Bilsatena when Wolverhampton was granted to Wulfrun then in 996 as Bilsetnatun in the grant charter of St. Mary's Church (now St. Peter's Collegiate Church, Wolverhampton). It is later mentioned in the Domesday Book as a village called Billestune, being a largely rural area until the 19th century. Bilsetnatun can be interpreted as meaning the settlement (ton) of the folk (saetan) of the ridge (bill).

Situated two miles southeast of Wolverhampton, it was extensively developed for factories and coal mining. Many houses were constructed in the Bilston area. Between 1920 and 1966, the council replaced most of the 19th-century terraced houses with rented modern houses and flats on developments like Stowlawn, the Lunt and Bunker's Hill. By 1964 there were more than 6,000 council houses there.

Bilston has had a market in the town centre for many years.

Bilston Urban District Council was formed in 1894 under the Local Government Act 1894 covering the ancient parish of Bilston. The urban district was granted a Royal Charter in 1933, becoming a municipal borough and the First Charter Mayor was Alderman Herbert Beach.

In 1966 the Borough of Bilston was abolished, with most of its territory incorporated into the County Borough of Wolverhampton (see History of West Midlands), although parts of Bradley in the east of the town were merged into Walsall borough.

Bilston Town Hall, dating from 1872, has now been refurbished and re-opened. It had been derelict for more than a decade after Wolverhampton Council discontinued its use as housing offices, but now operates as a venue for events, conferences, performances and occasions.

Bilston lost its passenger railway station in 1972, although goods trains continued to pass through the site of the station for a further decade. The town's new bus station opened in October 1991, interlinking with the town's Midland Metro station, which opened in May 1999.

The huge British Steel Corporation plant to the west of the town centre was closed in 1979, after 199 years of steel production at the site, with the loss of nearly 2,000 jobs. Part of the site was developed as the Sedgemoor Park Housing Estate between 1986 and 1989, and a B&Q superstore opened on another part of the site in December 1993, forming the first phase of a new small retail park and industrial estate which developed over the next decade. The GKN steel plant to the south of the town centre closed in 1989.

Construction of the long-awaited Black Country Route began in the mid 1980s, with the first section being opened in 1986 and the second section in 1988. By 1992, the third phase of the route was complete, although the final phase wasn't completed until July 1995, by which time Bilston had a direct unbroken dual carriageway link with Dudley, Walsall and the M5 Motorway. The Black Country Spine Road opened at the same time, improving Bilston's road links with West Bromwich and Birmingham.

21st century developments in Bilston include the South Wolverhampton and Bilston Academy and the adjoining Bert Williams Leisure Centre, which form the centrepiece of the town's new Urban Village which is planned to include an eventual total of more than 1,000 new homes. 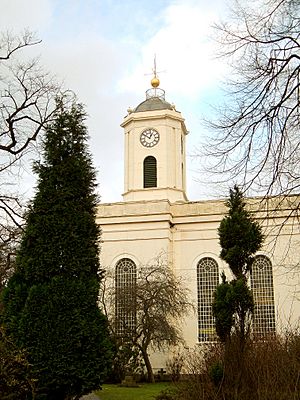 Christian worship in Bilston can be traced back to the original chapel dating from 1090. In 1458 the chapel was replaced by St Leonard's Chantry. And a third renovated church was consecrated in 1733. The modern church dates from a rebuilding of 1826 and is thus the fourth church on the same site. The church has a stunningly modern appearance being whitewashed inside and out, giving it a very neat and clean appearance compared to most English churches. In this respect it resembles many American and German churches and some of the Russian Orthodox Churches. It is also unusual in having a chamfered square tower, giving it an octagonal appearance, in being surmounted with a cupola, a golden globe with weather vane and a fenced viewing platform. These are all extremely unusual features in English churches.

John Wilkinson, "king of the ironmasters", built a blast furnace in Bilston in 1748. He lived and died in Bradley, Staffordshire. His body was returned to his hometown of Clifton in Cumberland.

Hugh Walters lived all his life in Bilston.

Mayor Ben Bilboe was a noted socialist and possible inspiration for J. R. R. Tolkien's 'Bilbo' in The Hobbit.

James Fleet (born 1954) is a British actor. He is most famous for his roles as the bumbling and well-meaning Tom in the 1994 British romantic comedy film Four Weddings and a Funeral, and the dim-witted Hugo Horton in the BBC situation comedy television series The Vicar of Dibley.

David Daker, born in Bilston in 1935, is a British actor. His best-known roles are in television. He played PC Owen Culshaw in Z-Cars, Jarvis in Porridge, Captain Nathan Spiker in Dick Turpin and Harry Crawford in Boon.

Don Powell, drummer in the band Slade, was born in Bilston.

Richard Salter began making the first spring scales in Britain in Bilston in the late 1760s.

Steve Woolam, Born in Bilston in 1946 and died in 1976 was one of the founder members of the Electric Light Orchestra.

Reg Lewis who scored both goals for Arsenal in their 2-0 victory over Liverpool in the 1950 FA Cup final was born in Bilston.

Bert (The Cat) Williams MBE, goalkeeper in the 1940s and 1950s with Wolverhampton Wanderers (420 appearances) and also with the England squad (31 caps). Born in Bradley, Bilston in 1920 he died in Shifnal in 2014. He has a sports centre in his name in

David Pearson bass player was born in Bilston in 1959.

From 1850 to 1972 there was a railway station in Bilston town centre, but passenger services were then withdrawn and the line via Bilston (from Wolverhampton Low Level to Birmingham Snow Hill) had been almost completely abandoned within a decade. The final stub of the railway, connecting a town centre scrapyard with the South Staffordshire Line at Wednesbury, closed in 1992, only to be re-opened seven years later as the first phase of the West Midlands Metro tram line between Wolverhampton and Birmingham.

The West Midlands Metro serves Bilston with 3 stops, Bilston Central in the Centre, Loxdale & The Crescent. The town is set to be served by 2 new lines by 2024, with trams travelling to Stourbridge & Walsall.

There was also a further railway station within the town: Bilston West on the Oxford-Worcester-Wolverhampton Line. Due to building encroachment on the track bed, it's impossible to reopen this line.

Another significant development in the Bilston area was the A463 Black Country Route. With more and more cars on the road, the roads around Bilston town centre became increasingly congested as the 20th century progressed. It became so severe that, by the late 1960s, the government had drawn up plans for a new motorway bypassing Bilston (and running from the A4123 near Coseley to Junction 10 of the M6 motorway at Walsall), which was scheduled to be completed by 1976. However, the plans collapsed and Bilston was condemned to increased congestion, for another decade at least. The plans for a new dual carriageway were revived in the early 1980s. This time the planners had decided on a slightly different route, which would run much closer to Bilston town centre. The first phase of the road (to be known as Black County Route) was completed in 1986, though initially running around half a mile east of the A4123. It was extended in 1990 to Oxford Street in Bilston town centre. This expansion resulted in a number of buildings being demolished and some roads having to be re-routed while one road (Market Street) was obliterated. This new road changed the face of Bilston town centre forever. During 1995, the final phase of the Black Country Route between Bilston town centre and Junction 10 of the M6 was completed. This new road has seen a major improvement in the traffic flow around Bilston town centre. 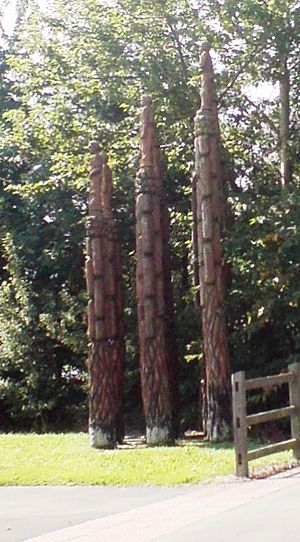 Steel columns at Bilston by Robert Koenig. viewed from the side, August 2008

At the Bilston end of the Black Country Route can be seen the group of wooden statues designed by Robert Koenig and called "Steel Columns." "This sculpture was made from 15 lengths of sweet chestnut which stretch up to 6 metres in height. The male and female figures depicted are based on those found in old Victorian photographs of Bilston. The title Steel Columns is a reference to Bilston's steel making background and the connection the figures had with this history."

Art and craft works of local significance from the eighteenth century are displayed at Bilston Craft Gallery, which also has a temporary exhibition space where local art and crafts are often displayed.

The artist William Harold Dudley as born in Bilston; several of his works are in the collection of Wolverhampton Art Gallery.

John Major, prime minister of the UK from 1990 to 1997, had family living in nearby Walsall,

The town had its own parliamentary constituency from 1918 until 1974, which also included nearby Sedgley and Coseley. However, it was then incorporated into Wolverhampton South East, where it has remained since, and under further boundary reorganisation it could be divided into up to four parliamentary seats, with the bulk of the town being divided between two reorganised Wolverhampton seats but smaller parts of the town being absorbed into Dudley and Walsall constituencies. However these plans have been shelved for the time being.

Bilston has 15 primary schools, and two secondary schools – South Wolverhampton and Bilston Academy and Moseley Park School, which was originally Etheridge Secondary Modern (formerly Fraser Street Schools), and Bilston Boys' Grammar School. Manor Primary School, which used to be a secondary school, is sometimes incorrectly believed to be in Bilston, but is actually in Woodcross which is within the Wolverhampton-governed part of Coseley. In 1962 Green Acres Junior school had teachers which included Mr and Mrs. Webb and Mr. Elwell who introduced classical music and elocution lessons to soften Wolverhampton accents. About 8 students went on to Grammar Schools in 1963 including Mr. and Mrs. Webb's twins - Christopher and Nicholas; top student Timothy Calloway; and the first coloured student, Pravin Patel, who went on to Bilston Grammar School to be the first coloured student there as well.

Bilston had a Cholera Orphan School which was opened on 3 August 1833 following a severe outbreak during the second cholera pandemic (1829–51) which had left 450 orphans in Bilston after the death of 742 sufferers. The Royal School, Wolverhampton has similar origins.

All content from Kiddle encyclopedia articles (including the article images and facts) can be freely used under Attribution-ShareAlike license, unless stated otherwise. Cite this article:
Bilston Facts for Kids. Kiddle Encyclopedia.