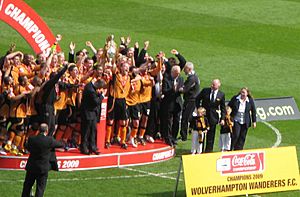 Wolves after winning the 2008-09 Championship trophy

Wolverhampton Wanderers are an English association football club. They are based in Wolverhampton, West Midlands. The club started in 1877 and play their home games at a stadium called Molineux Stadium. They have won the FA Cup four times.

According to Football365, Wolves are the fourth most successful team in the history of English football. They have only twice been in the lowest tier of the league system.

In 2009 they won the Football League Championship. This meant they were promoted into the Premier League for the following season. Also promoted were runners-up Birmingham City F.C., and Burnley F.C. from the play-offs.

All content from Kiddle encyclopedia articles (including the article images and facts) can be freely used under Attribution-ShareAlike license, unless stated otherwise. Cite this article:
Wolverhampton Wanderers F.C. Facts for Kids. Kiddle Encyclopedia.