The England national football team has represented England in international football since the first international match in 1872. It is controlled by The Football Association (FA), the governing body for football in England, which is affiliated with UEFA and comes under the global jurisdiction of world football's governing body FIFA. England competes in the three major international tournaments contested by European nations: the FIFA World Cup, the UEFA European Championship, and the UEFA Nations League. England is one of eight nations to have won the World Cup.

England is the joint oldest national team in football. It played in the world's first international football match in 1872, against Scotland. England's home ground is Wembley Stadium, London, and its training headquarters is St George's Park, Burton upon Trent. The team's manager is Gareth Southgate.

England has qualified for the FIFA World Cup 15 times. It won the 1966 World Cup, when it also hosted the finals, and finished fourth in both 1990 and 2018. England has never won the UEFA European Championship, with its best performance to date being runner-up in 2020. As a constituent country of the United Kingdom, England is not a member of the International Olympic Committee and so does not compete at the Olympic Games. 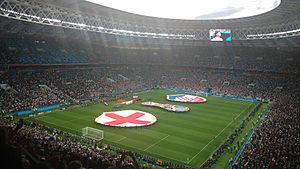 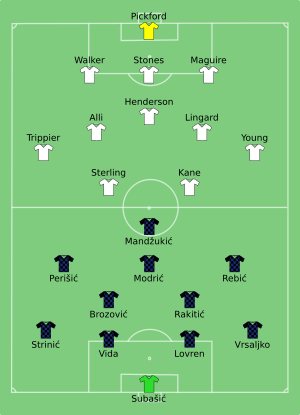 England first appeared at the 1950 FIFA World Cup, and have subsequently qualified for a total of 15 FIFA World Cup finals tournaments, tied for sixth best by number of appearances. They are also tied for sixth by number of wins, alongside Spain. The national team is one of eight national teams to have won at least one FIFA World Cup title. The England team won their first and only World Cup title in 1966. The tournament was played on home soil, and England defeated West Germany 4–2 in the final. In 1990, England finished in fourth place, losing 2–1 to host nation Italy in the third place play-off, after losing on penalties to champions West Germany in the semi-final. They also finished in fourth place in 2018, after losing 2–0 to Belgium in the third place play-off and 2–1 to Croatia in the semi-final after extra time. The team also reached the quarter-final stage in 1954, 1962, 1970, 1986, 2002 and 2006.

England failed to qualify for the World Cup in 1974, 1978 and 1994. The team's earliest exit in the finals tournament was its elimination in the first round in 1950, 1958 and, most recently, the 2014 FIFA World Cup. This was after being defeated in both their opening two matches for the first time, against Italy and Uruguay in Group D. In 1950, four teams remained after the first round, in 1958 eight teams remained and in 2014 sixteen teams remained. In 2010, England suffered its most resounding World Cup defeat, 4–1 to Germany, in the Round of 16 stage. This came after drawing with the United States and Algeria, and defeating Slovenia 1–0 in the group stage. 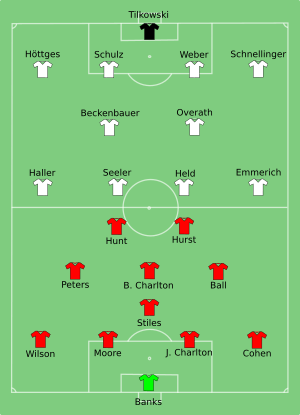 All content from Kiddle encyclopedia articles (including the article images and facts) can be freely used under Attribution-ShareAlike license, unless stated otherwise. Cite this article:
England national football team Facts for Kids. Kiddle Encyclopedia.