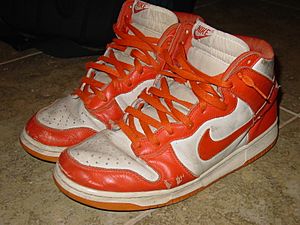 Nike, Incorporated is a company in the United States. It is based near Beaverton, Oregon.

Nike is the world's biggest brand of sports shoes, clothes and equipment.

The company was founded on 25 January 1964. Nike was named Blue Ribbon Sports at first ( it changed to Nike in 1971). The original founders of Nike are Bill Bowerman and Philip Knight. The company is named after Nike, the Greek goddess of victory .

All content from Kiddle encyclopedia articles (including the article images and facts) can be freely used under Attribution-ShareAlike license, unless stated otherwise. Cite this article:
Nike, Inc. Facts for Kids. Kiddle Encyclopedia.