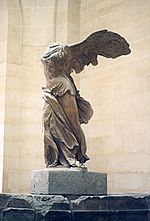 The Winged Victory of Samothrace in the Louvre, Paris

Nike (Greek: Νίκη) is the goddess of victory in Greek mythology. She was the daughter of Styx and Pallas and the sister of Cratos, Bia, and Zelus. Nike and her brothers and sister were all friends of Zeus.

Nike could run very fast, had wings and brings good luck. She is usually worshipped at the same time as Athena. Nike is often linked with sport, with companies named for her like Nike Inc. A picture of Nike also appears in all the medals for the Summer Olympics. Her Roman name is Victoria.

The most famous statue of Nike is the Winged Victory of Samothrace. This is now in the Louvre, which is a museum in Paris, France. She is a symbol of victory displayed outside Olympic stadiums in Olympia and in other places where there are Olympics. She is believed to always be watching over sport stadiums ready to choose the victor of the game.

All content from Kiddle encyclopedia articles (including the article images and facts) can be freely used under Attribution-ShareAlike license, unless stated otherwise. Cite this article:
Nike (mythology) Facts for Kids. Kiddle Encyclopedia.