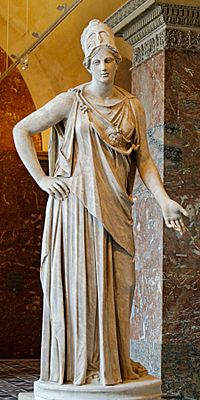 Athena, goddess of Wisdom and War, at the Louvre. Roman copy from the 1st century BC/AD after a Greek original of the 4th century BC, attributed to Cephisodotos or Euphranor. 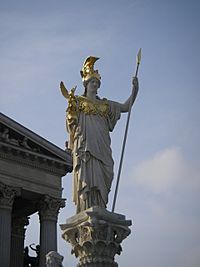 Athena, in front of the parliament building in Vienna, Austria

Athena is the Greek goddess of wisdom and strategy. She is one of the Twelve Olympians. Athena's symbol is the owl, the wisest of the birds. She also had a shield called Aegis, which was a present given to her by Zeus. She is often shown with her helmet on and with her shield, which has Medusa's head on it. This was a present to her from Perseus.

Athena is the protector of Athens, Greece, a city named after her. The Parthenon, which is on the Acropolis in Athens, is her most famous temple. She also helped many heroes, including Heracles, Jason, and Odysseus, and is always seen with Nike, the goddess of victory.

Athena is the goddess of knowledge, purity, arts, crafts, learning, justice and wisdom. She also plays a tough, clever and independent role. People think She helped them win the Trojan war. Athena often helped heroes, like Jason and Perseus. People worship her, because they think she can give their victory.

All content from Kiddle encyclopedia articles (including the article images and facts) can be freely used under Attribution-ShareAlike license, unless stated otherwise. Cite this article:
Athena Facts for Kids. Kiddle Encyclopedia.