A wooden door panel made to guard the house from an unwelcome guest (Thomas Regnaudin, ca. 1660).

In Ancient Greece, the Gorgoneion (Greek: Γοργόνειον) was originally a magic pendant showing the Gorgon's head. (The use of magic against evil, or bad luck is generally called Apotropaism). The gorgoneion was linked with the gods Zeus and Athena; both are said to have worn it as a pendant. It was also popular as a royal symbol, worn on shields and capes. These can be seen on the Alexander Mosaic and the Gonzaga Cameo.

Homer wrote about the Gorgon on four occasions, but only about the head, as if the creature had no body. Jane Ellen Harrison notes that "Medusa is a head and nothing more...a mask." The body was added many years later. Up to the 5th century BC, the head was shown as being very ugly, with her tongue sticking out, boar tusks, puffy cheeks, her eyeballs staring straight ahead and the snakes twisting all around her.

The direct frontal stare was highly unusual in ancient Greek art. In some cases a beard, (probably representing streaks of blood) was added to her chin, making her appear as a wild god, like Dionysus.

Gorgoneia painted on the shields of warriors on mid-5th century Greek vases are not as ugly, strange or frightening. By that time, the Gorgon had lost her tusks and the snakes were rather stylized. The Hellenistic marble known as the Medusa Rondanini shows how the Gorgon changed over time into a beautiful woman. 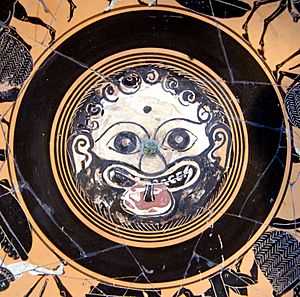 Gorgoneia are first seen in Greek art at the beginning of the 8th century BC. One of the earliest is on a coin found during an archaeological dig at Parium. Other early 8th-century examples were found at Tiryns. There is a similar image from the Knossos palace, dating from the 15th century BC. Marija Gimbutas even argues that "the Gorgon extends back to at least 6000 BC, as a ceramic mask from the Sesklo culture illustrates".

In the 6th century BC, gorgoneia of a basic type of "lion mask" were found all over Greek temples, especially in and around Corinth. Pedimental gorgoneia were common in Sicily; probably the earliest one is in the Temple of Apollo in Syracuse. Around 500 BC, they stopped being used to decorate monumental buildings, but were still shown on parts of the roof tiles (antefix) of smaller buildings throughout the next century.

As well as temples, the Gorgon image can be found on dress, dishes, weapons, and coins across the Mediterranean region from Etruria to the Black Sea coast. The Gorgon coins were made in 37 cities, making her image on coins second only to some of the main Greek gods. On mosaic floors, the gorgoneion was usually near the door, as if guarding it. On Attic kilns, a gorgoneion over the kiln door protected from accidents.

The Gorgon image remained popular even in Christian times, especially in the Byzantine Empire, including Kievan Rus (now the Ukraine). The image was used in Western Europe by the Italian Renaissance artists. In the 20th century, the gorgoneion was used by Gianni Versace as a logo for his fashion company.

Gimbutas says the gorgoneia are part of the Mother Goddess cult linked to "dynamic life energy". She said the gorgoneion is a typical European image. Jane Ellen Harrison, on the other hand, claims that many primitive cultures use similar ritual masks. These are meant to scare the owner from doing something wrong, or, as she terms it, to make an ugly face at him.

All content from Kiddle encyclopedia articles (including the article images and facts) can be freely used under Attribution-ShareAlike license, unless stated otherwise. Cite this article:
Gorgoneion Facts for Kids. Kiddle Encyclopedia.