Kids Encyclopedia Facts
This page is about clothing. For the geographic term, see headlands and bays. 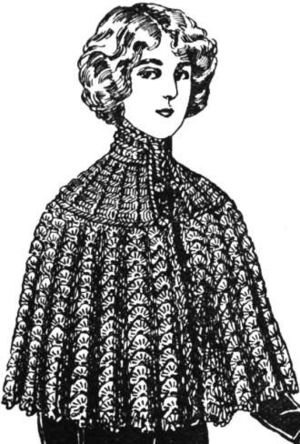 A young woman in a crocheted cape

A cape can mean any outer piece of clothing that has no sleeves. However, it usually it is long and covers only the back half of the wearer, It fastens around the neck. Capes were common in medieval Europe, especially when combined with a hood. Capes have had periodic returns to fashion. Roman Catholic clergy wear a type of cape known as a ferraiolo, which is worn for formal events. Capes are often used as rain wear in various military units and police forces. In modern times, comic-book super-heroes, such as Superman and Batman, are often shown wearing capes.

All content from Kiddle encyclopedia articles (including the article images and facts) can be freely used under Attribution-ShareAlike license, unless stated otherwise. Cite this article:
Cape Facts for Kids. Kiddle Encyclopedia.