Crochet is a way of creating fabric from yarn or thread using a crochet hook to pull loops of yarn through other loops. It is similar to knitting, except that usually only one loop is active at one time, and that a crochet hook is used instead of knitting needles. Also, crochet can not be made by machine. Crochet uses more yarn than knitting but is faster to make by hand.

Crochet is used to make clothing, household items like tablecloths, blankets and potholders, and toys. Lace is often made by crocheting, though it can be made by knitting and weaving as well.

Crocheting is also a great craft for younger children. The stitches are easy and their small hands are able to hold the crochet hook. They are also able to see progress very quickly and that motivates them to continue. It is very easy to start again after setting the project down, which will help to keep young people involved in the craft. 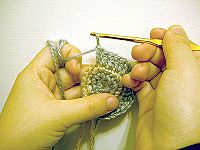 All content from Kiddle encyclopedia articles (including the article images and facts) can be freely used under Attribution-ShareAlike license, unless stated otherwise. Cite this article:
Crochet Facts for Kids. Kiddle Encyclopedia.