Kids Encyclopedia Facts
This page is about a South American type of Camel. For the religious teacher of Eastern religions, see Lama.

A Llama (Lama glama) is a mammal of the Camelidae family. It is from South America, the Andes Mountains of Peru and Ecuador.

Sometimes the name llama is used for all four South American camelids.

The following characteristics apply especially to llamas. Dentition of adults:-incisors 1/3 canines 1/1, premolars 2/2, molars 3/2; total 32. In the upper jaw, a compressed, sharp, pointed laniariform incisor near the hinder edge of the premaxilla is followed in the male at least by a moderate-sized, pointed, curved true canine in the anterior part of the maxilla. The isolated canine-like premolar that follows in the camels is not present. The teeth of the molar series, which are in contact with each other, consist of two very small premolars (the first almost rudimentary) and three broad molars, constructed generally like those of Camelus. In the lower jaw, the three incisors are long, spatulate, and procumbent; the outer ones are the smallest. Next to these is a curved, suberect canine, followed after an interval by an isolated minute and often deciduous simple conical premolar; then a contiguous series of one premolar and three molars, which differ from those of Camelus in having a small accessory column at the anterior outer edge. 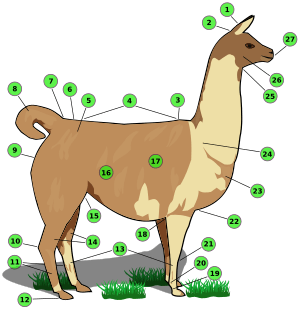 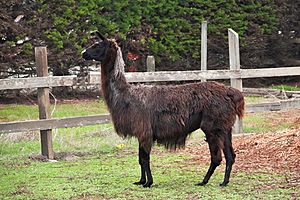 Picture of a Black Llama

The skull generally resembles that of Camelus, the larger brain-cavity and orbits and less-developed cranial ridges being due to its smaller size. The nasal bones are shorter and broader, and are joined by the premaxilla.

The ears are rather long and slightly curved inward, characteristically known as "banana" shaped. There is no dorsal hump. The feet are narrow, the toes being more separated than in the camels, each having a distinct plantar pad. The tail is short, and fibre is long, woolly and soft.

In essential structural characteristics, as well as in general appearance and habits, all the animals of this genus very closely resemble each other, so whether they should be considered as belonging to one, two, or more species is a matter of controversy among naturalists.

The question is complicated by the circumstance of the great majority of individuals that have come under observation being either in a completely or partially domesticated state. Many are also descended from ancestors that have previously been domesticated, a state that tends to produce a certain amount of variation from the original type. The four forms commonly distinguished by the inhabitants of South America are recognized as distinct species, though with difficulties in defining their distinctive characteristics.

The llama and alpaca are only known in the domestic state, and are variable in size and of many colors, being often white, brown, or piebald. Some are grey or black. The guanaco and vicuña are wild, the former being endangered, and of a nearly uniform light-brown color, passing into white below. They certainly differ from each other, the vicuña being smaller, more slender in its proportions, and having a shorter head than the guanaco. The vicuña lives in herds on the bleak and elevated parts of the mountain range bordering the region of perpetual snow, amidst rocks and precipices, occurring in various suitable localities throughout Peru, in the southern part of Ecuador, and as far south as the middle of Bolivia. Its manners very much resemble those of the chamois of the European Alps; it is as vigilant, wild, and timid. The fiber is extremely delicate and soft, and highly valued for the purposes of weaving, but the quantity that each animal produces is minimal. Alpacas are descended from wild vicuna ancestors, while domesticated llamas are descended from wild guanaco ancestors, though a considerable amount of hybridization between the two species has occurred.

Differential characteristics between llamas and alpacas include the llama's larger size, longer head, and curved ears. Alpaca fiber is generally more expensive, but not always more valuable. Alpacas tend to have a more consistent color throughout the body. The most apparent visual difference between llamas and camels is that camels have a hump or humps and llamas do not.

In addition, the llama (and other camelids) have an extremely long and complex large intestine (colon). The large intestine's role in digestion is to reabsorb water, vitamins and electrolytes from food waste that is passing through it. The length of the llama's colon allows it to survive on much less water than other animals. This is a major advantage in arid climates where they live.

The llama was domesticated about 5000 years ago. It was and is used for carrying things, and for wool. The llama was very important for the Incan people. Even today, llamas are used for similar reasons, but will more commonly be used as domesticated pets. The llama's close relative is the alpaca, who is a more demure, petite animal in comparison to the llama. Llamas have three related cousins - the alpaca, the guanaco, and the vicuña. The llama is the national symbol of Bolivia.

Llamas spit, and travel together. Llamas also have a high content of hemoglobin which causes there blood cells to be oval and not circular.

All content from Kiddle encyclopedia articles (including the article images and facts) can be freely used under Attribution-ShareAlike license, unless stated otherwise. Cite this article:
Llama Facts for Kids. Kiddle Encyclopedia.