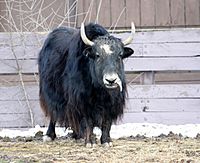 A domestic Yak in a Zoo

The yak is a long-haired bovine, or cow like animal, found throughout the Himalayan region of south Central Asia, including Pakistan's Kashmir region, and China's Tibet region and as far north as Mongolia. In Gilgit-Baltistan it is the unofficial territory animal of the region.

Most Yaks are domestic, which means they live on farms run by people. There are a few wild Yak but they aren't many left and are in danger of extinction. There may be as few as 100 Yak left in the wild. Wild male Yaks stand about 2–2.2 meters tall at the shoulder, the females about 1 metre. Domestic Yaks are shorter, between 1 and 2 metres for both males and females. All Yaks have long, thick hair to keep them warm in the cold places they live. Wild yaks can be black or brown. Some domestic yaks are white. All kinds of yaks have horns.

Yaks are herd animals. This means they live in groups called herds. Yaks are herbivores, they don't eat meat. The oldest yaks can live up to 25 years.

All content from Kiddle encyclopedia articles (including the article images and facts) can be freely used under Attribution-ShareAlike license, unless stated otherwise. Cite this article:
Yak Facts for Kids. Kiddle Encyclopedia.