The American bison (American buffalo or just buffalo) is a bovine mammal. "Buffalo" is something of a mistake as it is only distantly related to the water buffalo and the African buffalo.

Bison are a keystone species. Their staple foods are grasses and sedges. They once roamed the North American continent in great herds, and their grazing helped shape the ecology of the Great Plains. The bisons has a large head with relatively small, curving horns. Its dark brown coat is long and shaggy on the forequarters, including the front legs, neck, and shoulders, while the rest of the body has shorter, finer hair.

American bison live in river valleys, and on prairies and plains. Typical habitat is open or semi-open grassland, as well as sagebrush, semi-arid lands and scrublands. Bison will also graze in hilly or mountainous areas where the slopes are not steep.

Although bison once roamed across North America, they are now ecologically extinct over most of their historic range. They live on in a few national parks and other small wildlife areas.

Spanning back many centuries, Native American tribes have had cultural and spiritual connections to the American bison, and it is the national mammal of the United States. 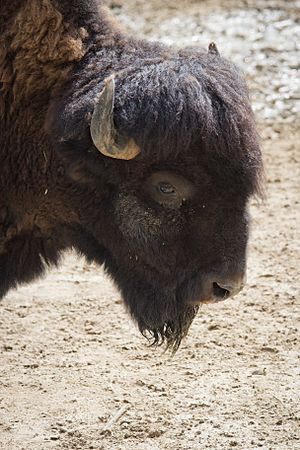 A bison has a shaggy, long, dark brown winter coat, and a lighter weight, lighter brown summer coat. Bison can reach up to 6 feet 6 inches (2 m) tall, 10 feet (3 m) long, and weigh 900 to 2,200 pounds (410 to 1,000 kg). As typical in ungulates, the male bison is slightly larger than the female. The biggest specimens on record have weighed as much as 2,500 pounds (1,100 kg). The heads and forequarters are massive, and both sexes have short, curved horns, which they use in fighting for status within the herd and for defense.

Bison are herbivores, grazing on the grasses and sedges of the North American prairies. They eat in the morning and evening, and rest during the day. Bison mate in August and September; gestation is 285 days. A single reddish-brown calf, born the following spring, nurses for a year. Bison are mature at three years of age, and have a life expectancy of approximately 15 years in the wild and up to 25 years in captivity.

For the first three months of life, juveniles are lighter in color than mature bison. One very rare condition is the white buffalo, in which the calf turns entirely white. White bison are considered sacred by many Native Americans. 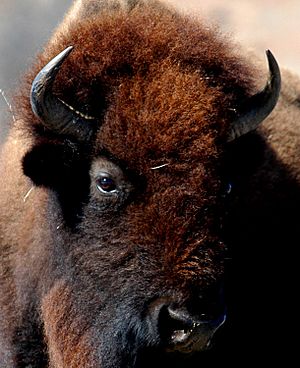 American bison tend to graze more, and browse less than their European cousins, due to their necks being set differently. The body of the American bison is hairier, though its tail has less hair than that of the European bison. 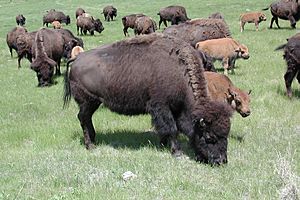 There are approximately 500,000 bison in captive commercial populations (mostly plains bison) on about 4,000 privately owned ranches.

Bison are now raised for meat and hides. The majority of bison in the world are being raised for human consumption. Bison meat is lower in fat and cholesterol than beef, a fact which has led to the development of beefalo, a fertile cross-breed of bison and domestic cattle.

Bison are found in both publicly and privately held herds. Custer State Park in South Dakota is home to 1,500 bison, one of the largest publicly held herds in the world. 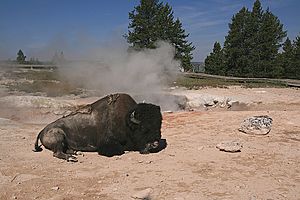 Recent genetic studies of privately owned herds of bison show that many of them include animals with genes from domestic cattle. For example, the herd on Santa Catalina Island, isolated since 1924 after being brought there for a movie shoot, were found to be mostly crossbreeds, it was found that most hybrids look exactly like purebred bison. 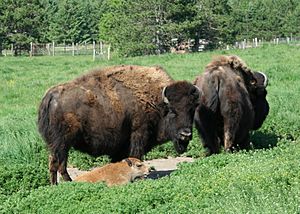 Female bison and a calf

Bison are mostly grazers, with both male and female herds migrating (moving) with the seasons and annual grasses. Bison can eat most of the grass in an area in a short time and so have to keep migrating to feed more of the entire herd.

Female bison live in maternal herds which include other females and their offspring. Male offspring leave their maternal herd when around three years old and will either live alone or join other males in bachelor herds. Male and female herds do not mingle until the breeding season. Male bison play no part in raising the young. 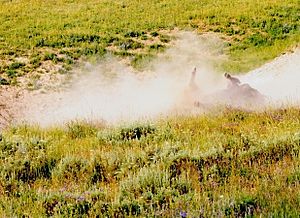 A bison wallow is a shallow depression in the soil, which is used either wet or dry. Bison roll in these depressions, covering themselves with dust or mud. Explanations suggested for wallowing behavior include grooming behavior associated with shedding, social behavior for group forming, play behavior, relief from skin irritation due to biting insects and removal of ticks and lice load.

In some areas, wolves are a major predator of bison. Wolf predation typically peaks in late spring and early summer, with attacks usually being concentrated on cows and calves. Observations have shown that wolves actively target herds with calves over ones with none. 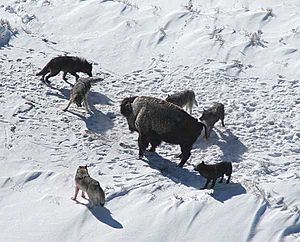 An American Bison standing its ground against a wolf pack

Bison display five apparent defense strategies in protecting calves from wolves. These include running to a cow, running to a herd, running to the nearest bull, run in the front or center of a stampeding herd, and entering water bodies such as lakes or rivers.

When fleeing wolves in open areas, cows with young calves take the lead, while bulls take to the rear of the herds, to guard the cows' escape. The length of a bison hunt varies, ranging from lasting a few minutes to 11 hours.

Bison typically ignore wolves not displaying hunting behavior. Wolf packs specializing in bison tend to have a greater number of males, as their superior size to the females allows them to wrestle bison to the ground more effectively. The Grizzly Bear can also pose a threat to calves and sometimes adult bison. 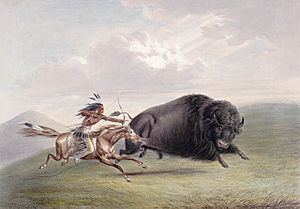 As European-descended populations began to press west from the eastern portions of the United States in the 19th century, the bison population was hunted heavily. Americans hunted the buffalo for skins, leaving the meat to rot, in some cases allegedly with the specific intent of depriving the Plains Indians of a food source.

Native Americans also contributed to the collapse of the bison, with the Comanche alone killing 280,000 bison a year by the 1830s. A long and intense drought further increased the pressure on the bison population.

At the end of the 19th century, conservationists – alarmed by the decline of the buffalo – began to take measures to preserve the population, despite lack of support from the United States government. 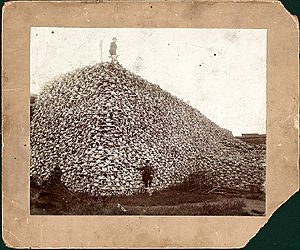 Conservationists such as James "Scotty" Philip acquired buffalo and bred them on private land in hopes of reintroducing the species.

Canada, the United States and Mexico list bison nationally as both wildlife and domestic livestock. Legal status varies among States.

In the modern day, bison hunting is allowed in limited areas to cull herds to target population, and to prevent wild bison from mingling with (and thus sharing diseases with) domestic herds. Bison are legally hunted in the American states of Wyoming and Montana, and the Canadian province of Alberta. 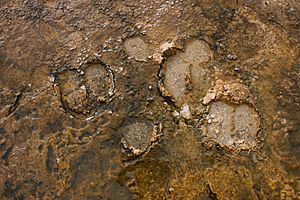 The first thoroughfares of North America, except for the time-obliterated paths of mastodon or muskox and the routes of the Mound Builders, were the traces made by bison and deer in seasonal migration and between feeding grounds and salt licks.

Many of these routes, hammered by countless hoofs were followed by the Indians as courses to hunting grounds and as warriors' paths. They were invaluable to explorers and were adopted by pioneers. 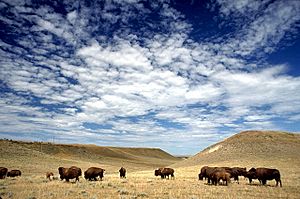 Bison on range land in Wyoming

Bison traces were characteristically north and south, but several key east-west trails were used later as railways. Some of these include the Cumberland Gap, from the Potomac River through the Allegheny divide to the Ohio River headwaters, and through the Blue Ridge Mountains to upper Kentucky.

A heavily used trace crossed the Ohio River at the Falls of the Ohio and ran west, crossing the Wabash River near Vincennes, Indiana.

The bison paved the way for the railroads to the Pacific.

Bison as a symbol 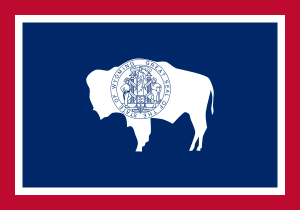 Wyoming uses a bison in its state flag.

The American bison is often used in North America in official seals, flags, and logos. In the United States, the American Bison is a popular symbol in the Great Plains states. Kansas, Oklahoma, and Wyoming have adopted the animal as their official state mammal, and many sports teams have chosen the bison as their mascot.

In Canada, the bison is the official animal of the province of Manitoba and appears on the Manitoba flag. It is also used in the official coat of arms of the Royal Canadian Mounted Police.

Several American coins feature the bison, perhaps most famously on the reverse side of the "buffalo nickel" from 1913 to 1938. In 2005, the United States Mint coined a nickel with a new depiction of the bison as part of its "Westward Journey" series.

The Kansas and North Dakota state quarters, part of the "50 State Quarter" series, each feature bison. 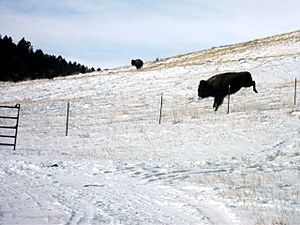 Bison are among the most dangerous animals encountered by visitors to the various U.S. and Canadian National Parks, especially Yellowstone National Park. Although they are not carnivorous, they will attack humans if provoked.

They appear slow because of their sluggish movements, but they can easily outrun humans—they have been observed running as fast as 35 miles per hour (56 km/h).

Between 1978 and 1992, nearly five times as many people in Yellowstone National Park were killed or injured by bison as by bears (12 by bears, 56 by bison). Bison are also more agile than one might expect, given the animal's size and body structure.

All content from Kiddle encyclopedia articles (including the article images and facts) can be freely used under Attribution-ShareAlike license, unless stated otherwise. Cite this article:
American bison Facts for Kids. Kiddle Encyclopedia.