The Henry Mountains is a mountain range located in the southeastern portion of the U.S. state of Utah and run in a generally north–south direction, extending over a distance of about 30 miles (48 km). They were named by Almon Thompson in honor of Joseph Henry, the first secretary of the Smithsonian Institution. The nearest town of any size is Hanksville, Utah, which is north of the mountains. The Henry Mountains were the last mountain range to be added to the map of the 48 contiguous U.S. states (1872), and before their official naming by Thompson, were sometimes referred to as the "Unknown Mountains." In Navajo, the range is still referred to as Dził Bizhiʼ Ádiní ("mountain whose name is missing"). 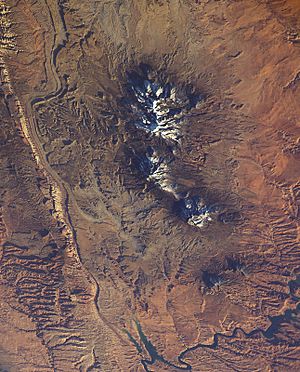 The Henry Mountains dominate the center of this view, a lower-resolution, cropped image from the Image Science & Analysis Laboratory, NASA Johnson Space Center. Lake Powell and the Colorado River are to the south, and the Waterpocket Fold is to the west.

The Henry Mountains are drained by a number of canyon systems which radiate away from the isolated range, flowing north into the Fremont River, east into the Dirty Devil River, or south into Lake Powell.

The geology of these mountains was first studied in 1875-1876 by Grove Karl Gilbert. He coined the term "laccolite" (now laccolith) to describe the characteristic shapes of some of the igneous intrusions that core the mountains. The main type of igneous rock is porphyritic diorite.

Ages of the igneous rocks are important for understanding the evolution of the Colorado Plateau. Ages of these rocks were reported to be about 45 to 50 million years in older geologic literature. However, it has been established that these intrusions formed in the period from about 23 to 31 million years ago, using uranium–lead dating of zircon and argon–argon dating of hornblende; fission track dating also has yielded consistent results (the older, erroneous ages were by potassium–argon dating). The intrusions are hosted by Permian to Cretaceous sedimentary rocks. The geology of these mountains is similar to the geology of the La Sal Range and of the Abajo Mountains, both also on the Colorado Plateau in southeastern Utah: locations are shown on a satellite image presented with information about the La Sal Range.

The Henry Mountains are home to approximately 350 American bison. Via genetic testing of mitochondrial and nuclear DNA, the Henry Mountains bison herd was recently shown to be one of only three free-roaming and genetically purebred bison herds on public lands in the United States. This study, published in 2015, also showed the Henry Mountains bison to be free of brucellosis, a bacterial disease that was imported with non-native domestic cattle to North America. The other two American herds are in Yellowstone National Park, and Wind Cave National Park in South Dakota. The majority of free-ranging American Bison (approximately 90%) are found in Alberta, British Columbia, Yukon, and the Northwest Territories, with additional populations in Alaska transplanted from Canada in 2008.

The Henry Mountains Bison Herd was created in 1941 when 18 bison, including three bulls, were moved from Yellowstone National Park and released near the Dirty Devil River, south and east of Hanksville, Utah. An additional five bulls were added to the population in 1942. The herd has gradually moved toward the Henry Mountains, frequenting elevations up to 10,000 ft (3,000 m). The Henry Mountain herd has been brucellosis-free since 1963.

A population objective of 325 bison by 2012 was set by Utah wildlife biologists for the Henry Mountain herd. Since the bison reproduce easily and the herds have been larger than this in the past, a decision was made to reduce the size of the herd. To achieve this objective, and increase overall genetic diversity, breeding animals are being transplanted to other locations from the herd. In January, 2008, Utah Division of Wildlife Resources officials transplanted 31 animals to the Book Cliffs in eastern Utah. The new group joined 14 animals previously released in August, 2008 from a private herd on the nearby Uintah and Ouray Indian Reservation. In addition, special licenses are issued annually to hunt the animals and help reduce the excess population. In 2009, 146 public once-in-a-lifetime Henry Mountain bison hunting permits were issued.

Much of the area is managed by the United States Bureau of Land Management. Eggnog is a former ranch site in the area.

All content from Kiddle encyclopedia articles (including the article images and facts) can be freely used under Attribution-ShareAlike license, unless stated otherwise. Cite this article:
Henry Mountains Facts for Kids. Kiddle Encyclopedia.