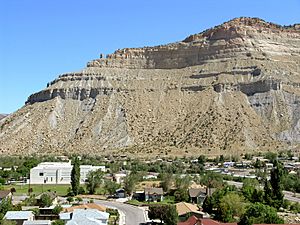 The Spring Canyon sandstones in the Book Cliffs above the town of Helper, Utah. There are several sedimentary cycles visible in the cliffs (perhaps up to seven or eight) 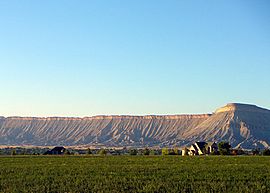 The Book Cliffs are a series of desert mountains and cliffs in western Colorado and eastern Utah in the western United States. They are so named because the cliffs of Cretaceous sandstone that cap many of the south-facing buttes appear similar to a shelf of books. 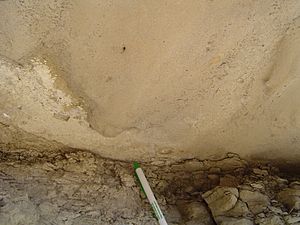 A flute cast, one of many sedimentary structures found in the Book Cliffs

In January, 2009, Utah Division of Wildlife Resources officials transplanted 31 bison from the Henry Mountains bison herd to the Book Cliffs. The new group joined 14 animals previously released in August, 2008 from a private herd on the nearby Uintah and Ouray Indian Reservation. Since this herd is located approximately 100 miles (160 km) north of the Henry Mountains, across mostly harsh, desert terrain, it should perhaps be considered as a separate herd, the Book Cliffs bison herd.

All content from Kiddle encyclopedia articles (including the article images and facts) can be freely used under Attribution-ShareAlike license, unless stated otherwise. Cite this article:
Book Cliffs Facts for Kids. Kiddle Encyclopedia.