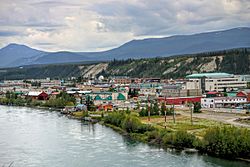 Downtown Whitehorse along the Yukon River

Yukon ( also commonly called the Yukon) is the smallest and westernmost of Canada's three federal territories (the other two are the Northwest Territories and Nunavut). The territory has the smallest population of any province or territory in Canada, with 35,874 people. Whitehorse is the territorial capital and Yukon's only city.

The territory was split from the Northwest Territories in 1898 and was named the "Yukon Territory". The federal government's Yukon Act, which received royal assent on March 27, 2002, established "Yukon" as the territory's official name, though "Yukon Territory" is also still popular in usage and Canada Post continues to use the territory's internationally approved postal abbreviation of YT. Though officially bilingual (English and French), the Yukon Government also recognizes First Nations languages.

At 5,959 m (19,551 ft), Yukon's Mount Logan, in Kluane National Park and Reserve, is the highest mountain in Canada and the second-highest on the North American continent (after Denali in the U.S. state of Alaska). Most of Yukon has a subarctic climate, characterized by long cold winters and brief warm summers. The Arctic Ocean coast has a tundra climate.

Notable rivers include the Yukon River, after which the territory was named, as well as the Pelly, Stewart, Peel, White and Tatshenshini rivers.

Long before the arrival of Europeans, central and southern Yukon was populated by First Nations people, and the area escaped glaciation. Sites of archeological significance in Yukon hold some of the earliest evidence of the presence of human occupation in North America. The sites safeguard the history of the first people and the earliest First Nations of the Yukon.

The volcanic eruption of Mount Churchill in approximately 800 AD in what is now the U.S. state of Alaska blanketed southern Yukon with a layer of ash which can still be seen along the Klondike Highway, and which forms part of the oral tradition of First Nations peoples in Yukon and further south in Canada.

Coastal and inland First Nations had extensive trading networks. European incursions into the area only began early in the 19th century with the fur trade, followed by missionaries. By the 1870s and 1880s gold miners began to arrive. This drove a population increase that justified the establishment of a police force, just in time for the start of the Klondike Gold Rush in 1897. The increased population coming with the gold rush led to the separation of the Yukon district from the Northwest Territories and the formation of the separate Yukon Territory in 1898. 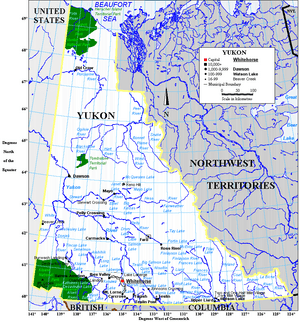 The territory is the approximate shape of a right triangle, bordering the U.S. state of Alaska to the west and northwest for 1,210 km (752 mi) mostly along longitude 141° W, the Northwest Territories to the east and British Columbia to the south. Its northern coast is on the Beaufort Sea. Its ragged eastern boundary mostly follows the divide between the Yukon Basin and the Mackenzie River drainage basin to the east in the Mackenzie mountains.

Most of the territory is in the watershed of its namesake, the Yukon River. The southern Yukon is dotted with a large number of large, long and narrow glacier-fed alpine lakes, most of which flow into the Yukon River system. The larger lakes include Teslin Lake, Atlin Lake, Tagish Lake, Marsh Lake, Lake Laberge, Kusawa Lake and Kluane Lake. Bennett Lake on the Klondike Gold Rush trail is a lake flowing into Nares Lake, with the greater part of its area within Yukon. 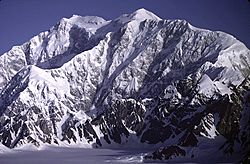 Mount Logan from the southeast

Other watersheds include the Mackenzie River, the Peel Watershed and the Alsek–Tatshenshini, and a number of rivers flowing directly into the Beaufort Sea. The two main Yukon rivers flowing into the Mackenzie in the Northwest Territories are the Liard River in the southeast and the Peel River and its tributaries in the northeast.

Notable widespread tree species within Yukon are the black spruce and white spruce. Many trees are stunted because of the short growing season and severe climate.

The capital, Whitehorse, is also the largest city, with about three-quarters of the population; the second largest is Dawson City (pop. 2,016), which was the capital until 1952. 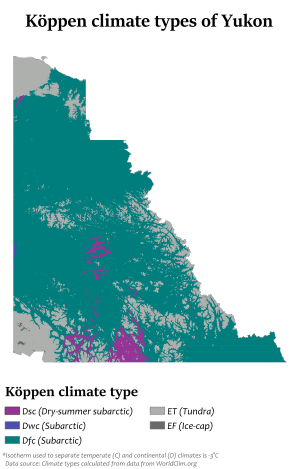 While the average winter temperature in the Yukon is mild by Canadian arctic standards, no other place in North America gets as cold as the Yukon during extreme cold snaps. The temperature has dropped down to −60 °C (−76 °F) three times, 1947, 1954, and 1968. The most extreme cold snap occurred in February 1947 when the abandoned town of Snag dropped down to −63.0 °C (−81.4 °F).

Unlike most of Canada where the most extreme heat waves occur in July, August, and even September, The Yukon's extreme heat tends to occur in June and even May. The Yukon has recorded 36 °C (97 °F) three times. The first time was in June 1969 when Mayo recorded a temperature of 36.1 °C (97 °F). 14 years later this record was almost beaten when Forty Mile recorded 36 °C (97 °F) in May 1983. The old record was finally broken 21 years later in June 2004 when the Mayo Road weather station, located just northwest of Whitehorse, recorded a temperature of 36.5 °C (97.7 °F). 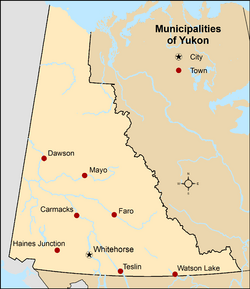 According to the 2006 Canada Census the majority of the territory's population was of European descent, although it has a significant population of First Nations communities across the territory.

The top ten ancestries were:

The 2011 National Household Survey examined Yukon's ethnocultural diversity and immigration. At that time, 87.7% of residents were Canadian-born and 24.2% were of Aboriginal origin. The most common countries of birth for immigrants were the United Kingdom (15.9%), the Philippines (15.0%), and the United States (13.2%). Among very recent immigrants (between 2006 and 2011) living in Yukon, 63.5% were born in Asia.

The Yukon Language Act "recognises the significance" of aboriginal languages in Yukon; however, only English and French are available for laws, court proceedings, and legislative assembly proceedings.

The 2011 National Household Survey reported that 49.9% of Yukoners reported having no religious affiliation, the highest percentage in Canada. The most frequently reported religious affiliation was Christianity, reported by 46.2% of residents. Of these, the most common denominations were the Catholic Church (39.6%), the Anglican Church of Canada (17.8%) and the United Church of Canada (9.6%).

Although English is the main language used in the territory, as evidenced by the census, the Government of Yukon recognizes several aboriginal languages as part of the cultural heritage of the territory: the Tlingit, and the less common Tahltan, as well as seven Athapaskan languages, Upper Tanana, Gwitchin, Hän, Northern Tutchone, Southern Tutchone, Kaska and Tagish, some of which are rare. As noted above, the "aboriginal identity population" makes up a relatively small part of the total population, accounting for about 25 percent. Notwithstanding, the aboriginal culture is strongly reflected in such areas as winter sports, as in the Yukon Quest sled dog race. The modern comic-book character Yukon Jack depicts a heroic aboriginal persona. By far the strongest cultural and tourism aspect of Yukon, however, is the legacy of the Klondike Gold Rush (1897–1899), which inspired such contemporary writers at the time as Robert W. Service, Jack London and Jules Verne and which continues to inspire films and games from Mae West's Klondike Annie to The Yukon Trail (see Cultural legacy of the Klondike Gold Rush). Notable residents have included Leslie Nielsen, Erik Nielsen and Pierre Berton.

All content from Kiddle encyclopedia articles (including the article images and facts) can be freely used under Attribution-ShareAlike license, unless stated otherwise. Cite this article:
Yukon Facts for Kids. Kiddle Encyclopedia.