John Griffith "Jack" London (born John Griffith Chaney; January 12, 1876 – November 22, 1916) was an American novelist, journalist, and social activist. A pioneer in the world of commercial magazine fiction, he was one of the first writers to become a worldwide celebrity and earn a large fortune from writing. He was also an innovator in the genre that would later become known as science fiction.

Some of his most famous works include The Call of the Wild and White Fang, both set in the Klondike Gold Rush, as well as the short stories "To Build a Fire", "An Odyssey of the North", and "Love of Life". He also wrote about the South Pacific in stories such as "The Pearls of Parlay" and "The Heathen", and of the San Francisco Bay area in The Sea Wolf.

London was part of the radical literary group "The Crowd" in San Francisco and a passionate advocate of unionization, socialism, and the rights of workers. He wrote several powerful works dealing with these topics, such as his dystopian novel The Iron Heel, his non-fiction exposé The People of the Abyss, and The War of the Classes. 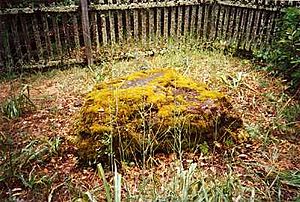 Grave of Jack and Charmian London

London died November 22, 1916, in a sleeping porch in a cottage on his ranch. London had been a robust man but had suffered several serious illnesses. London's ashes were buried on his property not far from the Wolf House. London's funeral took place on November 26, 1916, attended only by close friends, relatives, and workers of the property.

In accordance with his wishes, he was cremated and buried next to some pioneer children, under a rock that belonged to the Wolf House. The grave is marked by a mossy boulder. The buildings and property were later preserved as Jack London State Historic Park, in Glen Ellen, California.

All content from Kiddle encyclopedia articles (including the article images and facts) can be freely used under Attribution-ShareAlike license, unless stated otherwise. Cite this article:
Jack London Facts for Kids. Kiddle Encyclopedia.