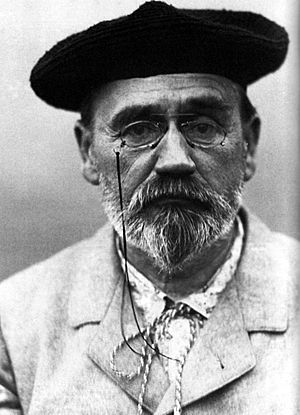 Naturalism was a 19th century literary movement. It was a development of the realism movement. Realism attempted to show subjects as they actually were, honestly and naturally. Naturalism added scientific elements such as environment and heredity to fictional characters. Unlike realism, naturalism used characters who were of the lower classes. It was also known for themes including taboo and violence. Émile Zola was the best-known writer of the literary school of naturalism. He was joined by other writers such as Gustave Flaubert, and Alphonse Daudet.

All content from Kiddle encyclopedia articles (including the article images and facts) can be freely used under Attribution-ShareAlike license, unless stated otherwise. Cite this article:
Naturalism (literature) Facts for Kids. Kiddle Encyclopedia.