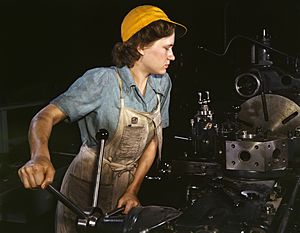 "Rosie the Riveter" was an iconic symbol of the American homefront and a departure from gender roles due to wartime necessity.

Sociology is the study of societies and how humans act in groups. Sociology is a social science. People who study sociology are called sociologists.

Auguste Comte (1789 - 1857) was first to use the term. The problems caused by the change to an industrial society, where many people moved to cities and worked in factories, was an early focus of sociology. Karl Marx, Max Weber and Émile Durkheim were leading figures in the study of social phenomena. Themes included: community, authority, status, alienation and lack of power.

In the 2000s, sociology looks at such things as: race, ethnicity, class, gender, the family and social interaction. It also studies the breakdown of social structures; crime and divorce. Sociology can also be looked at as the study of the worldwide society. A society is the community of people living in a particular country or region and having shared customs, laws, and organizations.

What do sociologists do?

Sociologists research the structures that organize society, such as race, gender (whether a person is male or female), and social classes (rich or poor).

Most sociologists work in one or more specialty areas or "sub-fields". Sociology includes many sub-fields that examine different aspects of society. For example, social stratification studies inequality and class structure in society. The field of demography studies changes in a population size or type. The field of criminology examines criminal behavior and crime. Political sociology studies government and laws. Sociology of race and sociology of gender examine how people think about race and gender.

Many sociologists also do research outside of the university. Their research helps teachers, lawmakers, and government administrators to make better institutions, government programs, and rules.

Sociologists often use statistics to count and measure patterns in how people act or behave. Sociologists also interview people or hold group discussions to find out why people behave in certain ways. Some sociologists combine different research methods.

Social analysis has been done since the time of Plato. Sociology became a type of science in the early 1800s. European cities were changing as many people moved into cities and began working in factories. Sociologists tried to understand how people interacted and how groups interacted.

The word "sociology" was invented by French thinker Auguste Comte in 1838. Early thinkers who wrote about sociology included Karl Marx and Max Weber.

All content from Kiddle encyclopedia articles (including the article images and facts) can be freely used under Attribution-ShareAlike license, unless stated otherwise. Cite this article:
Sociology Facts for Kids. Kiddle Encyclopedia.