Rosie the Riveter facts for kids 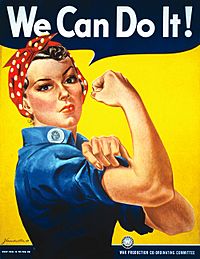 Rosie the Riveter is a cultural icon of the United States who appeared in a World War II propaganda poster titled "We Can Do It!". She is often used as a symbol of feminism. In 1944 a movie called Rosie the Riveter was released.

In 1997 the Rosie the Riveter Memorial Committee was started.

All content from Kiddle encyclopedia articles (including the article images and facts) can be freely used under Attribution-ShareAlike license, unless stated otherwise. Cite this article:
Rosie the Riveter Facts for Kids. Kiddle Encyclopedia.