A big band is a type of musical group that plays jazz music. They were very popular in the 1930s and 1940s. A big band usually has between 12 and 25 musicians. They include a singer and people who play instruments like saxophones, trumpets, trombones, drums. Some famous big band leaders were Duke Ellington, Benny Goodman, Glenn Miller, Cab Calloway and Count Basie.

Big bands started as accompaniment for dancing. In contrast to the typical jazz emphasis on improvisation, big bands relied on written compositions and arrangements. They gave a greater role to bandleaders, arrangers, and sections of instruments rather than soloists.

Twenty-first century big bands can be considerably larger than their predecessors, exceeding 20 players, with some European bands using 29 instruments and some reaching 50.

Before 1910, social dance in America was dominated by steps such as the waltz and polka. As jazz migrated from its New Orleans origin to Chicago and New York City, energetic, suggestive dances traveled with it. During the next decades, ballrooms filled with people doing the jitterbug and Lindy Hop. The dance duo Vernon and Irene Castle popularized the foxtrot while accompanied by the Europe Society Orchestra led by James Reese Europe.

One of the first bands to accompany the new rhythms was led by a drummer, Art Hickman, in San Francisco in 1916. Hickman's arranger, Ferde Grofé, wrote arrangements in which he divided the jazz orchestra into sections that combined in various ways. This intermingling of sections became a defining characteristic of big bands. In 1919, Paul Whiteman hired Grofé to use similar techniques for his band. Whiteman was educated in classical music, and he called his new band's music symphonic jazz. The methods of dance bands marked a step away from New Orleans jazz. With the exception of Jelly Roll Morton, who continued playing in the New Orleans style, bandleaders paid attention to the demand for dance music and created their own big bands. They incorporated elements of Broadway, Tin Pan Alley, ragtime, and vaudeville.

Duke Ellington led his band at the Cotton Club in Harlem. Fletcher Henderson's career started when he was persuaded to audition for a job at Club Alabam in New York City, which eventually turned into a job as bandleader at the Roseland Ballroom. At these venues, which themselves gained notoriety, bandleaders and arrangers played a greater role than they had before. Hickman relied on Ferde Grofé, Whiteman on Bill Challis. Henderson and arranger Don Redman followed the template of King Oliver, but as the 1920s progressed they moved away from the New Orleans format and transformed jazz. They were assisted by a band full of talent: Coleman Hawkins on tenor saxophone, Louis Armstrong on cornet, and multi-instrumentalist Benny Carter, whose career lasted into the 1990s. 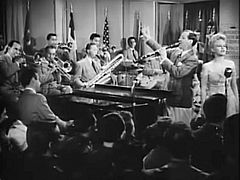 This type of music flourished through the early 1930s, although there was little mass audience for it until around 1936. Up until that time, it was viewed with ridicule and looked upon as a curiosity. After 1935, big bands rose to prominence playing swing music and held a major role in defining swing as a distinctive style. Western swing musicians also formed popular big bands during the same period.

There was a considerable range of styles among the hundreds of popular bands. Many of the better known bands reflected the individuality of the bandleader, the lead arranger, and the personnel. Count Basie played a relaxed, propulsive swing, Bob Crosby more of a dixieland style, Benny Goodman a hard driving swing, and Duke Ellington's compositions were varied and sophisticated. Many bands featured strong instrumentalists whose sounds dominated, such as the clarinets of Benny Goodman and Artie Shaw, the trombone of Jack Teagarden, the trumpet of Harry James, the drums of Gene Krupa, and the vibes of Lionel Hampton. The popularity of many of the major bands was amplified by star vocalists, such as Frank Sinatra with Tommy Dorsey, Helen O'Connell and Bob Eberly with Jimmy Dorsey, Ella Fitzgerald with Chick Webb, Billie Holiday and Jimmy Rushing with Count Basie, Dick Haymes and Helen Forrest with Harry James, Doris Day with Les Brown, and Peggy Lee with Benny Goodman. Some bands were "society bands" which relied on strong ensembles but little on soloists or vocalists, such as the bands of Guy Lombardo and Paul Whiteman.

By this time the big band was such a dominant force in jazz that the older generation found they either had to adapt to it or simply retire. With no market for small-group recordings (made worse by a Depression-era industry reluctant to take risks), musicians such as Louis Armstrong and Earl Hines led their own bands, while others, like Jelly Roll Morton and King Oliver, lapsed into obscurity.

The major "black" bands of the 1930s included, apart from Ellington's, Hines's and Calloway's, those of Jimmie Lunceford, Chick Webb, and Count Basie. The "white" bands of Benny Goodman, Artie Shaw, Tommy Dorsey, Shep Fields and, later, Glenn Miller were more popular than their "black" counterparts from the middle of the decade. Bridging the gap to white audiences in the mid-1930s was the Casa Loma Orchestra and Benny Goodman's early band. 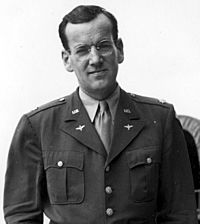 White teenagers and young adults were the principal fans of the big bands in the late 1930s and early 1940s. They danced to recordings and the radio and attended live concerts. 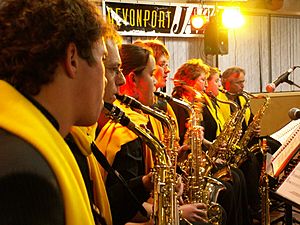 Big bands uplifted morale during World War II. Many musicians served in the military and toured with USO troupes at the front, with Glenn Miller losing his life while traveling between shows. Many bands suffered from the loss of personnel and quality declined at home during the war years. The 1942–44 musicians' strike worsened the situation. Vocalists began to strike out on their own. By the end of the war, swing was giving way to less danceable music, such as bebop. Many of the great swing bands broke up, as the times and tastes changed.

Although big bands are identified with the swing era, they continued to exist after those decades, though the music they played was often different from swing.

As jazz was expanded during the 1950s through the 1970s, the Basie and Ellington bands were still around, as were bands led by Buddy Rich, Gene Krupa, Lionel Hampton, Earl Hines, Les Brown, Clark Terry, and Doc Severinsen. Progressive bands were led by Dizzy Gillespie, Gil Evans, Carla Bley, Toshiko Akiyoshi and Lew Tabackin, Don Ellis, and Anthony Braxton.

In the 1960s and 1970s, big band rock became popular by integrating such musical ingredients as progressive rock experimentation, jazz fusion, and the horn choirs often used in blues and soul music, with some of the most prominent groups including Chicago, Blood, Sweat and Tears, Tower of Power, and, from Canada, Lighthouse. The genre was gradually absorbed into mainstream pop rock and the jazz rock sector.

Modern big bands can be found playing all styles of jazz music.

In the late 1990s, there was a swing revival in the U.S. The Lindy Hop became popular again and young people took an interest in big band styles again.

Big bands maintained a presence on American television, particularly through the late-night talk show, which has historically used big bands as house accompaniment.

Big Bands began to appear in movies in the 1930s through the 1960s, though cameos by bandleaders were often stiff and incidental to the plot. Fictionalized biographical films of Glenn Miller, Gene Krupa, and Benny Goodman were made in the 1950s.

The bands led by Helen Lewis, Ben Bernie, and Roger Wolfe Kahn's band were filmed by Lee de Forest in his Phonofilm sound-on-film process in 1925, in three short films which are in the Library of Congress film collection.

All content from Kiddle encyclopedia articles (including the article images and facts) can be freely used under Attribution-ShareAlike license, unless stated otherwise. Cite this article:
Big band Facts for Kids. Kiddle Encyclopedia.