Her voice spanned three octaves. She could sing very high notes and very low notes. She was famous for her scat singing. She won 14 Grammy Awards. She was awarded the National Medal of Art and the Presidential Medal of Freedom.

Ella Fitzgerald was born in 1917 in Newport News, Virginia, United States to William and Temperance "Tempie" Fitzgerald. Soon after Ella was born, her parents separated. She went to live in Yonkers, New York with her mother and her mother's boyfriend, Joseph Da Silva. In 1923, Fitzgerald's half-sister, Frances Da Silva, was born. When she was a child, Fitzgerald lived in the Colored Orphan Asylum in Riverdale, the Bronx.

As a youngster, Fitzgerald wanted to be a dancer. She loved listening to jazz music by Louis Armstrong, Bing Crosby and The Boswell Sisters. She especially liked the lead singer Connee Boswell, later saying, "My mother brought home one of her records, and I fell in love with it....I tried so hard to sound just like her."

In 1932, Fitzgerald's mother died. Ella began doing badly at school. She got into trouble with the police, and was sent to a reform school. She escaped from the reformatory, and for a time was homeless.

Fitzgerald had her first job as a singer when she was 17 on November 21, 1934 at the Harlem Opera House in Harlem, New York. She was able to compete in one of its famous "Amateur Nights". At first she was going to go on stage and dance but, intimidated by some local dancers, she decided to sing instead. She won the first prize of US$25 singing Connee Boswell's "Judy" and "The Object of My Affection". 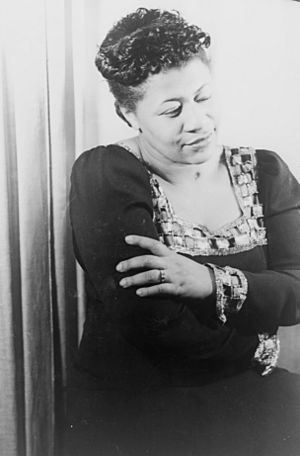 A photograph of Ella Fitzgerald Carl Van Vechten in 1940

In January 1935, Fitzgerald won the chance to perform for a week with the Tiny Bradshaw band at the Harlem Opera House. She met a drummer and bandleader called Chick Webb here. Webb had already hired a singer called Charlie Linton to work with the band. According to The New York Times, Webb was "reluctant to sign her....because she was gawky and unkempt, a diamond in the rough." Webb let her try singing with his band when they played a dance at Yale University.

Fitzgerald began singing often with Webb's Orchestra during 1935, at Harlem's Savoy Ballroom. She recorded several hit songs with them, including "Love and Kisses" and "(If You Can't Sing It) You'll Have to Swing It (Mr. Paganini)". In 1938 she co-wrote and sang a version of the nursery rhyme, "A-Tisket, A-Tasket". After this, she started getting famous.

Chick Webb died on June 16, 1939, and his band was renamed "Ella Fitzgerald and her Famous Orchestra". Fitzgerald became the bandleader. She recorded nearly 150 sides during her time with the orchestra.

In 1942, Fitzgerald left the band and began to work as a solo singer. She was signed to the Decca label, and she had several popular hit songs. She recording with other musicians like the Ink Spots, Louis Jordan, and the Delta Rhythm Boys.

Decca's Milt Gabler became her manager and she began working often for the jazz producer Norman Granz. She often sang in his Jazz at the Philharmonic concerts. Then, Granz became her manager, but he did not record her on any of his record labels for nearly a decade.

In the mid-1940s, after the swing era, and the end of the great touring big bands, jazz music became quite different. A new kind of jazz called bebop became popular and Fitzgerald changed her style of singing. She worked with Dizzy Gillespie's big band and started including scat singing as a big part of her performances. About singing with Gillespie, Fitzgerald said, "I just tried to do [with my voice] what I heard the horns in the band doing."

Her 1945 scat recording of "Flying Home" was later described by The New York Times as "one of the most influential vocal jazz records of the decade....Where other singers, most notably Louis Armstrong, had tried similar improvisation, no one before Miss Fitzgerald employed the technique with such dazzling inventiveness." Her be-bop recording of "Oh, Lady be Good!" (1947) was also very popular, and made people think of her as one of the most important jazz singers.

Granz did not like some of the music Fitzgerald was given at this time, so during her last years on the Decca label she recorded some duets with pianist Ellis Larkins, released in 1950 as Ella Sings Gershwin.

In 1955, Fitzgerald left Decca, and joined Granz's new record label, Verve Records. She said later, "I had gotten to the point where I was only singing bebop. I thought bebop was 'it', and that all I had to do was go some place and sing bop. But it finally got to the point where I had no place to sing. I realized then that there was more to music than bop. Norman....felt that I should do other things, so he produced The Cole Porter Songbook with me. It was a turning point in my life."

A new album, Ella Fitzgerald Sings the Cole Porter Songbook, was released in 1956. It was the first of eight multi-album "Songbook" sets that she would record for Verve between 1956 and 1964. Many of the songs were standards and Fitzgerald tried to cross over into a non-jazz audience.

Ella Fitzgerald Sings the Duke Ellington Songbook was the only Songbook on which the composer of the songs also played with her. Duke Ellington and Billy Strayhorn, who had worked together for a long time, both played on half the set's 38 tracks, and wrote two new pieces of music for the album: "The E and D Blues", and a musical piece about Fitzgerald (the only "Songbook" track that Fitzgerald does not sing on).

The Songbook series became the Fitzgerald's most critically acclaimed and popular work. The New York Times wrote in 1996, "These albums were among the first pop records to devote such serious attention to individual songwriters, and they were instrumental in establishing the pop album as a vehicle for serious musical exploration."

Ella Fitzgerald also recorded albums of the songs of Cole Porter and George Gershwin in 1972 and 1983. The albums were called Ella Loves Cole and Nice Work If You Can Get It. A later album of songs by a single composer was released when she was with Pablo Records, Ella Abraça Jobim, with songs by Antonio Carlos Jobim.

While she was recording the Songbooks and the occasional studio album, Fitzgerald toured 40 to 45 weeks per year in the United States and internationally, with Norman Granz. Granz helped her to become one of the most important live jazz performers.

In the mid-1950s, Fitzgerald became the first African-American to perform at the Mocambo (a Hollywood nightclub), after Marilyn Monroe had persuaded the owner to make the booking. This was very important in Fitzgerald's career. The event was turned into a play by Bonnie Greer which is to receive a production in London's West End from November 2009.

Some live albums on Verve that she recorded are well thought of by critics: Ella at the Opera House, Ella in Rome and Ella in Berlin.

In later life, Fitzgerald kept a busy concert schedule, but her health worsened. She had heart surgery in 1986. She had diabetes, which accounted for her failing eyesight. Her diabetes worsened, and both legs were cut off (amputated) below the knees. She never completely recovered. She was unable to perform often. She spent time with family. Fitzgerald died in her Beverly Hills, California home on June 15, 1996. She was interred in the Sunset Mission Mausoleum at Inglewood Park Cemetery in Inglewood, California.

By the 1990s, Fitzgerald had recorded more than 200 songs. In 1991, she gave her final concert at Carnegie Hall. She had performed there 26 times. She received numerous awards. In 1979, she received Kennedy Center Honors. In 1987, she received the National Medal of Arts. She received the Presidential Medal of Freedom. France presented her with the Commander of Arts and Letters award. Yale University, Dartmouth, and other schools awarded her honorary doctorates. Several of Fitzgerald's awards, significant personal possessions, and documents were given to the Smithsonian Institution, the library of Boston University, the Library of Congress, and the Schoenberg Library at UCLA. 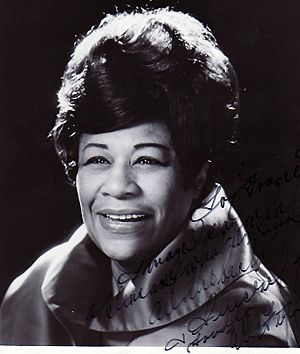 In 1941, Fitzgerald married Benny Kornegay, a convicted drug dealer. The marriage was annulled after two years. In December 1947, she married double bass player Ray Brown. They adopted a child of Fitzgerald's half-sister, Frances. They named him Ray Brown, Jr.. Fitzgerald and Brown divorced in 1953.

In July 1957, Reuters reported that Fitzgerald had secretly married Thor Einar Larsen, a young Norwegian, in Oslo. The affair was quickly forgotten when Larsen was sentenced to five months hard labor in Sweden for stealing money from a young woman.

All content from Kiddle encyclopedia articles (including the article images and facts) can be freely used under Attribution-ShareAlike license, unless stated otherwise. Cite this article:
Ella Fitzgerald Facts for Kids. Kiddle Encyclopedia.