Jazz is a type of music which was invented in the United States. Jazz music combines African-American music with European music. Jazz first became popular in the 1910s. It is still a popular music to play and hear because of the different styles.

Some common jazz instruments include the saxophone, trumpet, piano, double bass, and drums.

It is difficult to give an exact definition for "jazz". A singer Nina Simone said, "Jazz is not just music, it is a way of life, it is a way of being, a way of thinking". But when we talk about jazz as music, one important part of jazz is improvisation (improv), which means the person playing is making music up as they go along. If a jazz band is playing a song, the song may have several solos where one player will improvise while the rest of the band, except for the rhythm section (such as the piano, bass, or drums), does not play. Most jazz is very rhythmic, which is called "swing," and uses "blue" notes. Blue notes is referred as a musical term in blues. 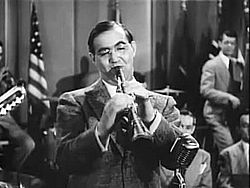 Jazz began in the United States in the early 20th century. Jazz music was first based on the music of African slaves who were forced to work in the plantations of the southern United States. This included call and response songs, spirituals, chants and blue notes. These characteristics are what developed blues, a sad song that slaves sung during their labor. These influences were indirect, through earlier musical forms such as ragtime.

Jazz also has musical styles from European music, as well as the brass and stringed instruments and (sometimes) the use of musical notation.

There have been different types of jazz through time. New Orleans jazz began in the early 1910s. Dixieland jazz was also popular. In the 1930s, there was swing jazz, which was also called big band jazz. In the 1940s, bebop became a major type of jazz, with fast songs and complex harmony.

Large jazz bands, which are called big bands, were also popular in the 1940s. Big bands usually have 5 saxophone players, 4 or 5 trumpet players, 4 trombone players, a piano player or guitar player, an acoustic bass player, a drummer, and sometimes a singer.

In the 1950s, there was hard bop jazz. In the 1960s, there was modern jazz and free jazz. In the 1970s, jazz fusion began to blend jazz music with rock music. Some jazz is still played with the same improv methods as it did at its beginning, except with modern electronic instruments.

Dance in Congo Square in the late 1700s, artist's conception by E. W. Kemble from a century later. 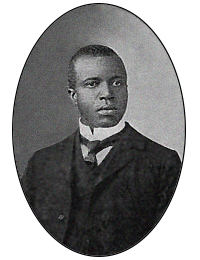 One of the key influences on jazz was blues, a rural folk art that changed as black musicians migrated to the cities in the late 19th century.

In addition, many early jazz musicians made a living playing in small marching bands, and the instruments of these groups became the basic instruments of jazz: brass, reeds, and drums.

Early jazz also frequently used the structure and beat of marches, which were the standard form of popular concert music at the turn of century.

Though jazz has its folk roots, it was partly created by formally-trained musicians like Lorenzo Tio. Scott Joplin, who played ragtime piano shows the different influences at work in the period.

An important event in the development of jazz was the tightening of the Jim Crow (racial segregation) laws in Louisiana in the 1890s. Accomplished musicians of mixed race were no longer allowed to work with whites but were easily able to find work in black bands and orchestras.

Before World War I public dance halls, clubs, and tea rooms opened in the cities, and black dances like the cakewalk and the shimmy were eventually adopted by a white public, especially the flappers. White audiences saw them first in vaudeville shows, then performed by exhibition dancers in the clubs.

Popular composers like Irving Berlin made attempts at jazzy writing. Nothing did more to popularize the idea of jazz than Berlin's hit song of 1911,"Alexander's Ragtime Band," which became a craze. Although the song wasn't written in rag time, the lyrics describe a jazz band. 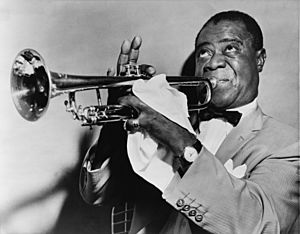 Trumpeter, bandleader and singer Louis Armstrong was a much-imitated innovator of early jazz.

Phonograph records made new music available everywhere. Through a few recordings aimed at black audiences, Louis Armstrong made the first big change in jazz. He was an extraordinary improviser, capable of creating endless variations on the initial melody. Musicians imitated him and jazz became a solo form. 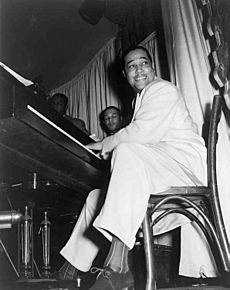 Duke Ellington at the Hurricane Club (1943)

The music was still a mixture of things - current dance numbers, novelty songs, show tunes. The Ellington band at the Cotton Club and the various Kansas City groups that became the Count Basie band date from this period. 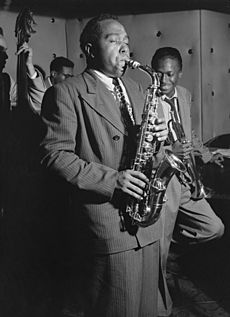 Black and white segregation began to decline in the mid-1930s when Benny Goodman hired pianist Teddy Wilson, vibraharpist Lionel Hampton, and guitarist Charlie Christian to join small groups. In the mid to late 1930s the popularity of swing music and big band music was at its height, making stars of such men as Glenn Miller and Duke Ellington. Swing was the popular music of this time.

Boogie woogie, used a doubled rhythm - that is, the rhythm section played "eight to the bar," eight beats per measure instead of four. Big Joe Turner, a Kansas City singer who worked in the 1930s with swing bands like Count Basie's, became a boogie woogie star in the 1940s and then in the 1950s was one of the first innovators of rock and roll, notably with his song "Shake, Rattle and Roll". 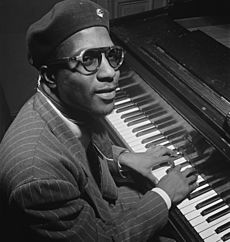 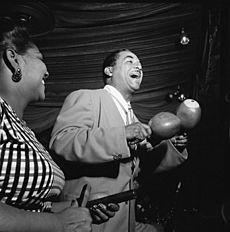 The next major stylistic turn came with bebop, led by saxophonist Charlie Parker (known as "Bird"). This marked a major shift from music for dancing towards an intellectual art. Hard bop was an attempt to make bop more appealing to audiences by incorporating influences from soul music, gospel music, and the blues. Later bebop and hard bop musicians, such as trumpeter Miles Davis made more stylistic advances with modal jazz. The instrumentalists would improvise around a given mode of the scale. Soul jazz was a development of hard bop which centred on the Hammond organ.

Free jazz was an experimental approach to jazz improvisation that developed in the late 1950s and early 1960s when musicians such as John Coltrane attempted to change or break down jazz conventions, such as regular tempos, tones, and chord changes.

With the growth of rock and roll in the 1960s came the hybrid form jazz-rock fusion, again involving Miles Davis. Jazz-rock fusion was developed by combining jazz improvisation with rock rhythms, electric instruments and the highly amplified stage sound of rock musicians such as Jimi Hendrix and Frank Zappa.

Latin jazz combines jazz harmonies and other concepts with rhythms and instruments from Africa and Latin America: Brazilian jazz and Afro-cuban jazz. While the music can be quite different, these forms of music are most definitely jazz, because they involve quite a bit of improvisation.

Harry Connick Jr. began his career playing stride piano and the dixieland jazz of his home, New Orleans, beginning with his first recording when he was ten years old.

April 30 is an "International Jazz Day". Each year jazz concerts and educational events take place around the world. This is the day to increase understanding to jazz. The United Nations Education and Science Organization (UNESCO) also take part in this event. People celebrate the day, because they believe the history of jazz has something to do with peace, freedom and equality.

All content from Kiddle encyclopedia articles (including the article images and facts) can be freely used under Attribution-ShareAlike license, unless stated otherwise. Cite this article:
Jazz Facts for Kids. Kiddle Encyclopedia.