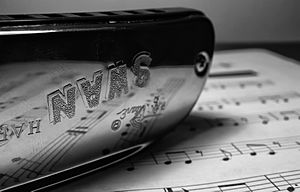 A harmonica is small musical instrument that is played with the mouth by blowing into holes in its side. Harmonicas are cheap and easy to play. Harmonicas produce their musical sounds from the vibrations of reeds in the harmonica's metal case. Harmonicas are used in blues music, folk music, rock and roll music, and pop music. A special type of harmonica, the chromatic harmonica, is used in jazz and classical music. Harmonicas are made in several different keys: G, A♭, A, B♭, B, C, D♭, D, E♭, E, F, and F♯. Each key can play a different range of notes. 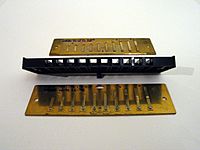 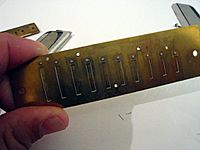 Reedplate mounted on the comb of a diatonic harmonica.

The basic parts of the harmonica are the comb, reed-plates and cover-plates.

The comb is the term for the main body of the instrument, which contains the air chambers that cover the reeds. The term comb originates from the similarities between simple harmonicas and a hair comb. Harmonica combs were traditionally made from wood, but now are usually made from plastic (ABS) or metal (including titanium for very high-end instruments). Some modern and experimental comb designs are complex in the way that they direct the air.

Comb material was assumed to have an effect on the tone of the harp. While the comb material does have a slight influence over the sound of the harmonica, the main advantage of a particular comb material over another one is its durability. In particular, a wooden comb can absorb moisture from the player's breath and contact with the tongue. This causes the comb to expand slightly, making the instrument uncomfortable to play. Various types of wood and treatments have been devised to reduce the degree of this problem.

An even more serious problem with wood combs, especially in chromatic harmonicas (with their thin dividers between chambers) is that the combs shrink over time. Comb shrinkage can lead to cracks in the combs due to the combs being held immobile by nails, resulting in disabling leakage. Much effort is devoted by serious players to restoring wood combs and sealing leaks. Some players used to soak wooden-combed harmonicas (diatonics, without windsavers) in water to cause a slight expansion, which they intended to make the seal between the comb, reed plates and covers more airtight. Modern wooden-combed harmonicas are less prone to swelling and contracting. Players still dip harmonicas in water for the way it affects tone and ease of bending notes.

Reed-plate is the term for a grouping of several reeds in a single housing. The reeds are usually made of brass, but steel, aluminium and plastic are occasionally used. Individual reeds are usually riveted to the reed-plate, but they may also be welded or screwed in place. Reeds fixed on the inside (within the comb's air chamber) of the reed-plate respond to blowing, while those on the outside respond to suction.

A notable exception to the traditional reed-plate design is the all-plastic harmonicas designed by Finn Magnus in the 1950s, where the reed and reed-plate were molded out of a single piece of plastic. The Magnus design had the reeds, reed-plates and comb made of plastic and either molded or permanently glued together.

Cover plates cover the reed-plates and are usually made of metal, though wood and plastic have also been used. The choice of these is personal — because they project sound, they determine the tonal quality of the harmonica. There are two types of cover plates: traditional open designs of stamped metal or plastic, which are simply there to be held, and enclosed designs (such as the Hohner Meisterklasse and Super 64, Suzuki Promaster and SCX), which offer a louder tonal quality. From these two basic types, a few modern designs have been created, such as the Hohner CBH-2016 chromatic and the Suzuki Overdrive diatonic, which have complex covers that allow for specific functions not usually available in the traditional design. It was not unusual in the late 19th and early 20th centuries to see harmonicas with special features on the covers, such as bells, which could be rung by pushing a button.

Windsavers are one-way valves made from thin strips of plastic, knit paper, leather or teflon glued onto the reed-plate. They are typically found in chromatic harmonicas, chord harmonicas and many octave-tuned harmonicas. Windsavers are used when two reeds share a cell and leakage through the non-playing reed would be significant. For example, when a draw note is played, the valve on the blow reed-slot is sucked shut, preventing air from leaking through the inactive blow reed. An exception to this is the recent Hohner XB-40 where valves are placed not to isolate single reeds but rather to isolate entire chambers from being active.

The mouthpiece is placed between the air chambers of the instrument and the player's mouth. This can be integral with the comb (the diatonic harmonicas, the Hohner Chrometta), part of the cover (as in Hohner's CX-12), or may be a separate unit entirely, secured by screws, which is typical of chromatics. In many harmonicas, the mouthpiece is purely an ergonomic aid designed to make playing more comfortable. However, in the traditional slider-based chromatic harmonica it is essential to the functioning of the instrument because it provides a groove for the slide.

Mark Wenner cups his hands around a "bullet mic" as he plays amplified harmonica.

Since the 1950s, many blues harmonica players have amplified their instrument with microphones and tube amplifiers. One of the early innovators of this approach was Marion "Little Walter" Jacobs, who played the harmonica near a "Bullet" microphone marketed for use by radio taxi dispatchers. This gave his harmonica tone a "punchy" mid-range sound that could be heard above an electric guitar. As well, tube amplifiers produce a natural distortion when played at higher volumes, which adds body and fullness to the sound. Little Walter also cupped his hands around the instrument, tightening the air around the harp, giving it a powerful, distorted sound, somewhat reminiscent of a saxophone, hence the term "Mississippi saxophone".

Harmonica players who play the instrument while performing on another instrument with their hands (e.g., an acoustic guitar) often use an accessory called a "neck rack" or holder to position the instrument in front of their mouth. A harmonica holder clamps the harmonica between two metal brackets, which are attached to a curved loop of metal that rests on the shoulders. This device is used by folk musicians, "one man bands" and singer/songwriters such as Bob Dylan, Tom Harmon, Neil Young, Eddie Vedder, Bruce Springsteen and blues singers Jimmy Reed and John Hammond Jr..

The chromatic harmonica uses a button-activated sliding bar to redirect air from the hole in the mouthpiece to the selected reed-plate, although there was one design, the "Machino-Tone," which controlled airflow by means of a lever-operated movable flap on the rear of the instrument. In addition, there is a "hands-free" modification of the Hohner 270 (12-hole) in which the player shifts the tones by moving the mouthpiece up and down with the lips, leaving the hands free to play another instrument. While the Richter-tuned 10-hole chromatic is intended to be played in only one key, the 12-, 14-, and 16-hole models (which are tuned to equal temperament) allow the musician to play in any key desired with only one harmonica. This harp can be used for any style, including Celtic, classical, jazz, or blues (commonly in third position).

Strictly speaking, "diatonic" denotes any harmonica that is designed for playing in only one key (though the standard "Richter-tuned" diatonic can be played in other keys by forcing its reeds to play tones that are not part of its basic scale; see Blues harp). Depending on the region of the world, "diatonic harmonica" may mean either the tremolo harmonica (in East Asia) or blues harp (In Europe and North America). Other diatonic harmonicas include octave harmonica.

The tremolo harmonica's distinguishing feature is that it has two reeds per note, with one slightly sharp and the other slightly flat. This provides a unique wavering or warbling sound created by the two reeds being slightly out of tune with each other and the difference in their subsequent waveforms interacting with each other (its beat). The Asian version, on which all 12 semitones can be played, is used in a large amount of East-Asian music, from rock to pop music.

These harmonicas are primarily designed for use in ensemble playing.

There are eight kinds of orchestral melody harmonica: the most common are the Horn harmonicas that are most often found in East Asia. These consist of a single large comb with blow only reed-plates on the top and bottom. Each reed sits inside a single cell in the comb. One version mimics the layout of a piano or mallet instrument, with the natural notes of a C diatonic scale in the lower reed-plate and the sharps/flats in the upper reed-plate in groups of two and three holes with gaps in between like the black keys of a piano (thus there is no E#/Fb hole nor a B#/Cb hole on the upper reed-plate). Another version has one "sharp" reed directly above its "natural" on the lower plate, with the same number of reeds on both plates.

"Horn harmonicas" are available in several pitch ranges, with the lowest pitched starting two octaves below middle C and the highest beginning on middle C itself; they usually cover a two or three octave range. They are chromatic instruments and are usually played in an East Asian harmonica orchestra instead of the "push-button" chromatic harmonica that is more common in the European/American tradition. Their reeds are often larger, and the enclosing "horn" gives them a different timbre, so that they often function in place of a brass section. In the past, they were referred to as horn harmonicas.

The other type of orchestral melodic harmonica is the Polyphonia, (though some are marked "Chromatica"). These have all twelve chromatic notes laid out on the same row. In most cases, they have both blow and draw of the same tone, though the No. 7 is blow only, and the No. 261, also blow only, has two reeds per hole, tuned an octave apart (all these designations refer to products of M. Hohner).

The chord harmonica has up to 48 chords: major, seventh, minor, augmented and diminished for ensemble playing. It is laid out in four-note clusters, each sounding a different chord on inhaling or exhaling. Typically each hole has two reeds for each note, tuned to one octave of each other. However, less expensive models often have only one reed per note. Quite a few orchestra harmonicas are also designed to serve as both bass and chord harmonica, with bass notes next to chord groupings. There are also other chord harmonicas, such as the Chordomonica (which operates similar to a chromatic harmonica), and the junior chord harmonicas (which typically provides 6 chords).

The ChengGong 程功 harmonica has a main body, and a sliding mouthpiece. The body is a 24-hole diatonic harmonica that starts from b2 to d6 (covering 3 octaves). Its 11-hole mouthpiece can slide along the front of the harmonica, which gives numerous chord choices and voicings (seven triads, three 6th chords, seven 7th chords, and seven 9th chords, for a total of 24 chords). As well, it is capable of playing single- note melodies and double stops over a range of three diatonic octaves. Unlike conventional harmonicas, blowing and drawing produce the same notes because its tuning is closer to the note layout of a typical Asian tremolo harmonica or the Polyphonias.

How they are played 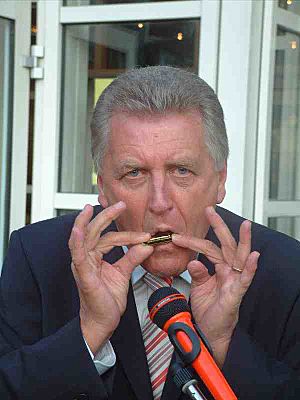 Harmonicas are played by blowing or sucking air into one side. On this side, there are many holes. Each hole has a different note. Different notes are played when you blow or suck air.

All content from Kiddle encyclopedia articles (including the article images and facts) can be freely used under Attribution-ShareAlike license, unless stated otherwise. Cite this article:
Harmonica Facts for Kids. Kiddle Encyclopedia.