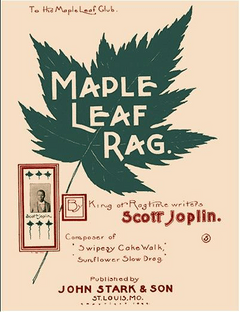 Second edition cover of "Maple Leaf Rag." It is one of the most famous rags.

Ragtime (or rag-time) is a musical genre which enjoyed its peak popularity between 1897 and 1918.

Its main characteristic trait is its syncopated, or 'ragged', rhythm. It began as dance music in American cities such as St. Louis and New Orleans years before being published as popular sheet music for piano.

Ragtime was a modification of the march made popular by John Philip Sousa, with additional polyrhythms typical of African music. The ragtime composer Scott Joplin became famous through the publication in 1899 of the Maple Leaf Rag and a string of ragtime hits that followed. For at least 12 years after its publication, the Maple Leaf Rag heavily influenced subsequent ragtime composers with its melody lines, harmonic progressions or metric patterns.

Ragtime fell out of favor as jazz claimed the public's imagination after 1917, but there have been numerous revivals since. First, in the early 1940s many jazz bands began to include ragtime in their repertoire and put out ragtime recordings on 78 rpm records. A more significant revival occurred in the 1950s as a wider variety of ragtime styles of the past were made available on records, and new rags were composed, published, and recorded.

In 1971 Joshua Rifkin brought out a compilation of Scott Joplin's work which was nominated for a Grammy Award. In 1973, the motion picture The Sting brought ragtime to a wide audience with its soundtrack of Joplin tunes. Subsequently, the film's rendering of Joplin's 1902 rag The Entertainer was a Top 5 hit in 1974.

Ragtime (with Joplin's work in the forefront) has been cited as an American equivalent of minuets by Mozart, mazurkas by Chopin, or waltzes by Brahms. Ragtime influenced classical composers including Erik Satie, Claude Debussy and Igor Stravinsky. Ragtime was included in the dance styles of Vernon and Irene Castle, and influenced the English ballroom dances, the foxtrot and the quickstep.

All content from Kiddle encyclopedia articles (including the article images and facts) can be freely used under Attribution-ShareAlike license, unless stated otherwise. Cite this article:
Ragtime Facts for Kids. Kiddle Encyclopedia.