The banjo is a string instrument, that was first played by African slaves a few hundred years ago in the United States. The idea came from other African instruments. The name banjo may have come from a Kimbundu word: mbanza, but it could have also come from a Senegambian word for the bamboo stick used for the banjo's neck.

The banjo is frequently associated with country, folk, Irish traditional and bluegrass music. Historically, the banjo occupied a central place in African American traditional music, before becoming popular in the minstrel shows of the 19th century. The banjo, with the fiddle, is a mainstay of American old-time music. It is also very frequently used in Traditional ("Trad") Jazz.

The modern banjo derives from instruments that had been used in the Caribbean since the 17th century by enslaved people taken from West Africa. Written references to the banjo in North America appear in the 18th century, and the instrument became increasingly available commercially from around the second quarter of the 19th century.

A Banza: a five double string courses Portuguese vihuela with two short strings. Mbanza is a string African instrument that has been built after the Portuguese Banza. "Banza" is quite similar to "Banjo". 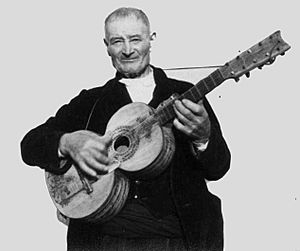 Various instruments in Africa, chief among them the kora, feature a skin head and gourd (or similar shell) body. The African instruments differ from early African American banjos in that the necks do not possess a Western-style fingerboard and tuning pegs, instead having stick necks, with strings attached to the neck with loops for tuning. Banjos with fingerboards and tuning pegs are known from the Caribbean as early as the 17th century. 18th- and early 19th-century writers transcribed the name of these instruments variously as bangie, banza, bonjaw, banjer and banjar.

In the Antebellum South, many black slaves played the banjo and taught their masters how to play.

Melody to Yankee Doodle, on the banjo, without and with drone notes and .

While five-string banjos are traditionally played with either fingerpicks or the fingers themselves, tenor banjos and plectrum banjos are played with a pick, either to strum full chords or, most commonly in Irish Traditional Music, play single note melodies.

The modern banjo comes in a variety of forms, including four- and five-string versions. A six-string version, tuned and played similarly to a guitar, has gained popularity. In almost all of its forms, banjo playing is characterized by a fast arpeggiated plucking, though there are many different playing styles.

The body, or pot, of a modern banjo typically consists of a circular rim (generally made of wood, though metal was also common on older banjos) and a tensioned head, similar to a drum head. Traditionally the head was made from animal skin, but today is often made of various synthetic materials. Most modern banjos also have a metal "tone ring" assembly that helps further clarify and project the sound, however many older banjos do not include a tone ring.

The banjo is usually tuned with friction tuning pegs or planetary gear tuners, rather than the worm gear machine head used on guitars. Frets have become standard since the late 19th century, though fretless banjos are still manufactured and played by those wishing to execute glissando, play quarter tones, or otherwise achieve the sound and feeling of early playing styles.

Modern banjos are typically strung with metal strings. Usually the fourth string is wound with either steel or bronze-phosphor alloy. Some players may string their banjos with nylon or gut strings to achieve a more mellow, old-time tone.

Some banjos have a separate resonator plate on the back of the pot to project the sound forward and give the instrument more volume. This type of banjo is usually used in bluegrass music, though resonator banjos are played by players of all styles, and are also used in old-time, sometimes as a substitute for electric amplification when playing in large venues.

The modern five-string banjo is a variation on Sweeney's original design. The fifth string is usually the same gauge as the first, but starts from the fifth fret, three quarters the length of the other strings. This lets the string be tuned to a higher open pitch than possible for the full-length strings. Because of the short fifth string, the five-string banjo uses a reentrant tuning—the string pitches don't proceed lowest to highest across the fingerboard. Instead, the fourth string is lowest, then third, second, first, and the fifth string is highest.

Five-string banjo players use many tunings. Probably the most common, particularly in bluegrass, is the Open-G tuning G4 D3 G3 B3 D4. 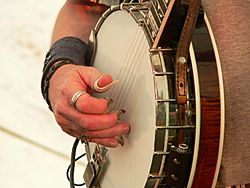 American old-time music typically uses the five-string open back banjo. It is played in a number of different styles, the most common being clawhammer or frailing, characterized by the use of a downward rather than upward stroke when striking the strings with a fingernail. Frailing techniques use the thumb to catch the fifth string for a drone after most strums or after each stroke ("double thumbing"), or to pick out additional melody notes in what is known as drop-thumb.

The five-string banjo has been used in classical music since before the turn of the 20th century.

Frederick Delius wrote for a banjo in his opera Koanga.

Kurt Weill has a banjo in his opera The Rise and Fall of the City of Mahagonny.

Four-string banjos, both plectrum and tenor, can be used for chordal accompaniment (as in early jazz), for single string melody playing (as in Irish traditional music), in "chord melody" style (a succession of chords in which the highest notes carry the melody), in tremolo style (both on chords and single strings), and a mixed technique called duo style that combines single string tremolo and rhythm chords.

The plectrum banjo is a standard banjo without the short drone string. It usually has 22 frets on the neck and a scale length of 26 to 28 inches, and was originally tuned C3 G3 B3 D4. It can also be tuned like the top four strings of a guitar, which is known as "Chicago tuning." As the name suggests, it is usually played with a guitar-style pick (that is, a single one held between thumb and forefinger), unlike the five-string banjo, which is either played with a thumbpick and two fingerpicks, or with bare fingers. 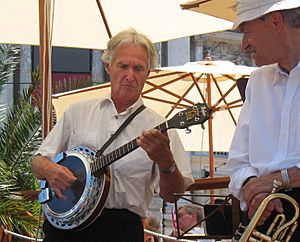 The shorter-necked, tenor banjo, with 17 ("short scale") or 19 frets, is also typically played with a plectrum. It became a popular instrument after about 1910.

The tenor banjo was a common rhythm-instrument in early 20th-century dance-bands. Its volume and timbre suited early jazz (and jazz-influenced popular music styles) and could both compete with other instruments (such as brass instruments and saxophones) and be heard clearly on acoustic recordings.

Some 1920s Irish banjo players picked out the melodies of jigs, reels and hornpipes on tenor banjos, decorating the tunes with snappy triplet ornaments.

In the late 19th and early 20th centuries there was a vogue in plucked-string instrument ensembles—guitar orchestras, mandolin orchestras, banjo orchestras—in which the instrumentation was made to parallel that of the string section in symphony orchestras. Thus "violin, viola, 'cello, bass" became "mandolin, mandola, mandocello, mandobass", or in the case of banjos, "banjolin, banjola, banjo cello, bass banjo".

Rarer than either the tenor or plectrum banjo is the cello banjo (also "banjo cello"). It's normally tuned C2-G2-D3-A3, one octave below the tenor banjo like the cello and mandocello. It played a role in banjo orchestras in the late nineteenth and early twentieth centuries.

The six-string banjo began as a British innovation by William Temlet, one of England's earliest banjo makers. He opened a shop in London in 1846, and sold banjos with closed backs and up to seven strings. He marketed these as "zither" Banjos from his 1869 patent. American Alfred Davis Cammeyer (1862–1949), a young violinist-turned banjo concert player, devised the five or six-string zither banjo around 1880. It had a wood resonator and metal "wire" strings (the 1st and 2nd melody strings and 5th "thumb" string. The 3rd melody string was gut and the 4th was silk covered) as well as frets and guitar-style tuning machines.

In the late 1890s Banjo maker F.C Wilkes developed a six-string version of the banjo, with the 6th string "tunnelled" through the neck.

Modern six-string bluegrass banjos have been made. These add a bass string between the lowest string and the drone string on a five-string banjo, and are usually tuned G4 G2 D3 G3 B3 D4.

Six-string banjos having a guitar neck and a banjo body have become quite popular since the mid-1990s.

A number of hybrid instruments exist, crossing the banjo with other stringed instruments. Most of these use the body of a banjo, often with a resonator, and the neck of the other instrument.

All content from Kiddle encyclopedia articles (including the article images and facts) can be freely used under Attribution-ShareAlike license, unless stated otherwise. Cite this article:
Banjo Facts for Kids. Kiddle Encyclopedia.