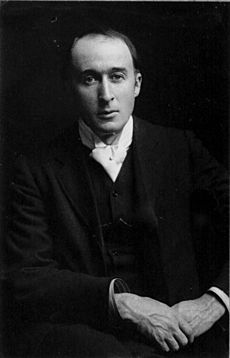 Frederick Delius (b.Bradford, 29 Jan.1862; d.Grez-sur-Loing, 10 June 1934) was an English composer. At first his parents did not let him study music, so he went off to Florida to work on an orange plantation. He later returned, studied music, and settled in France for the rest of his life. His music is often quite gentle and atmospheric, with chords that shift about in unusual ways. One of his best known orchestral works is On Hearing the First Cuckoo in Spring. In his last years he was very ill, but he still wanted to compose, so he dictated the music he heard in his head to a man called Eric Fenby.

All content from Kiddle encyclopedia articles (including the article images and facts) can be freely used under Attribution-ShareAlike license, unless stated otherwise. Cite this article:
Frederick Delius Facts for Kids. Kiddle Encyclopedia.