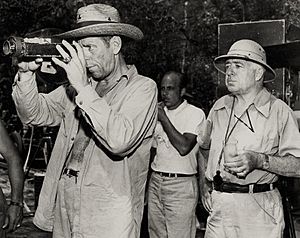 The story is about a young boy who adopts a trouble-making young deer. The story was later adapted as the 1994 TV film The Yearling starring Peter Strauss and Jean Smart.

Ezra "Penny" Baxter, once a Confederate soldier, and his wife Ora, are pioneer farmers near Lake George, Florida in 1878. Their son, Jody, a boy in his pre-teen years, is their only surviving child. Jody has a wonderful relationship with his warm and loving father. Ora, however, is still haunted by the deaths of the other children of the family she had lost over the years. She is very sombre and is afraid that Jody will end up dying if she shows her parental love to him. Jody finds her somewhat unloving and unreasonable.

With all of his siblings dead and buried, Jody longs for a pet to play with and care for. Penny is sympathetic and understanding, but Ora is disgusted and believes that a pet is nothing but trouble. One morning, Jody and his parents discover that their old enemy, a bear named Old Slewfoot, has returned and killed a calf and young pig from among their stock. They set out after the bear, accompanied by Penny's dogs Perk, Rip, and Julia. They catch up with the bear, but Old Slewfoot is able to escape after Perk flees from the bear fight in terror, Penny's gun backfires, and Julia is badly injured. Upset over his best hunting dog injured from the fight, his gun useless, and his new dog Perk useless as a hunting dog, Penny decides to trade in Perk for a new gun with his neighbors, the Forresters. Jody becomes acquainted with Fodderwing, who is the youngest of the Forresters and keeps a menagerie of pets, and the two become fast friends. Lem Forrester trades Penny a new shotgun in exchange for the mongrel Perk.

One day, as Penny and Jody are tracking down their missing hogs that had been stolen by the Forresters, a rattlesnake bites Penny before he kills it with his new gun. Penny kills a doe and uses its liver to draw out the venom. Jody asks to adopt the doe's orphaned fawn. Penny permits it but warns Jody that the fawn will have to be set free when it grows up.

When Jody goes to ask his only friend, Fodderwing, to name the fawn, Jody finds out that Fodderwing has just died. However, Buck Forrester tells Jody that Fodderwing had said that if he had a fawn he would name him Flag because of its white tail. Jody and his family attend Fodderwing's funeral, and at a generous request from the Forresters, Penny offers a eulogy about Fodderwing's kindness and wisdom with the wild animals and says that in the House of the Lord Fodderwing will be healed of his crippled body, walking around as easily as anyone else.

As the months pass, Jody and Flag are inseparable. One year later (now a "yearling"), Flag has grown up and become a nuisance to the household and farm; he eats newly-grown corn, destroys fences, and tramples on tobacco crops. After Penny is injured while trying to clear another field to make up for lost crops, Penny tells Jody that he and his mother have agreed that for Jody to keep Flag he must replant corn and build the fence around the field higher. Jody works hard and even receives help from Ora with the fence, but during the night, Flag manages to jump the new fence and destroys the new corn crop. Penny orders Jody to take the deer out into the woods and shoot it. Jody takes Flag out but does not have the heart to kill it. He orders the deer to go away and never return, but Flag comes back to their property and again devours the crop. Ora (whom Jody believes had always hated his pet) shoots Flag with a double-barreled shotgun, discharging one of the barrels but only wounding the deer. Penny orders Jody to put the deer out of its "torment". Rather than let his pet deer suffer an agonizing death, he follows his father's orders and kills Flag with the remaining shell.

The loss of Jody's beloved pet deer proves too much for him to handle: overwhelmed with anger and despair, he runs away from home. Three days later, he is rescued, unconscious and adrift on the river in a canoe, by a friendly boat captain and returns home. He and Penny quickly reconcile, but Ora is still out searching for him. Just before Jody goes to bed, Ora returns and sees that he is back. She becomes filled with happiness and emotion, knowing that her huge fear of losing her last child is now over. She happily runs into Jody's room and showers him with more affection than she has before. She is no longer afraid to show her parental love to him. 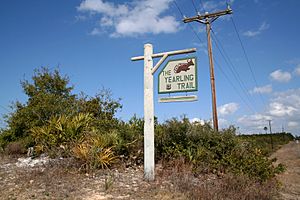 Trailhead of The Yearling Trail.

Herbert Stothart made arrangements of Frederick Delius's music, particularly Appalachia: Variations on an Old Slave Song, for the film.

The Yearling was presented on Stars in the Air on February 7, 1952. The 30-minute radio adaptation starred Gregory Peck and Jean Hagen.

The Yearling (1994) was a made-for-television remake of The Yearling, broadcast on CBS in the United States.

All content from Kiddle encyclopedia articles (including the article images and facts) can be freely used under Attribution-ShareAlike license, unless stated otherwise. Cite this article:
The Yearling (1946 film) Facts for Kids. Kiddle Encyclopedia.