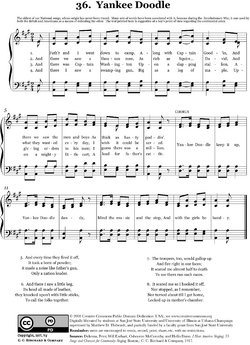 "Yankee Doodle" is a well-known American song, the early versions of which date to before the Seven Years' War and the American Revolution. It is often sung patriotically in the United States today and is the state anthem of Connecticut. Its Roud Folk Song Index number is 4501. The melody is thought to be much older than both the lyrics and the subject, going back to folk songs of Medieval Europe.

The tune of Yankee Doodle is thought to be much older than the lyrics, being well known across western Europe, including England, France, Netherlands, Hungary, and Spain. The melody of the song may have originated from an Irish tune "All the way to Galway" in which the second strain is identical to Yankee Doodle The earliest words of "Yankee Doodle" came from a Middle Dutch harvest song which is thought to have followed the same tune, possibly dating back as far as 15th-century Holland. It contained mostly nonsensical words in English and Dutch: "Yanker, didel, doodle down, Diddle, dudel, lanther, Yanke viver, voover vown, Botermilk und tanther." Farm laborers in Holland were paid "as much buttermilk (Botermilk) as they could drink, and a tenth (tanther) of the grain".

The term Doodle first appeared in English in the early seventeenth century and is thought to be derived from the Low German dudel, meaning "playing music badly", or Dödel, meaning "fool" or "simpleton". The Macaroni wig was an extreme fashion in the 1770s and became slang for being a fop. Dandies were men who placed particular importance upon physical appearance, refined language, and leisure hobbies. A self-made dandy was a British middle-class man who impersonated an aristocratic lifestyle. They notably wore silk strip cloth, stuck feathers in their hats, and carried two pocket watches with chains—"one to tell what time it was and the other to tell what time it was not". 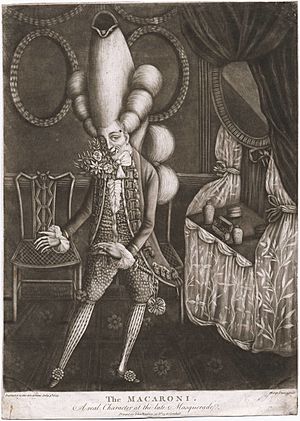 "The Macaroni. A real Character at the late Masquerade", mezzotint by Philip Dawe, 1773

The macaroni wig was an example of such Rococo dandy fashion, popular in elite circles in Western Europe and much mocked in the London press. The term macaroni was used to describe a fashionable man who dressed and spoke in an outlandishly affected and effeminate manner. The term pejoratively referred to a man who "exceeded the ordinary bounds of fashion" in terms of clothes, fastidious eating, and gambling.

In British conversation, the term "Yankee doodle dandy" implied unsophisticated misappropriation of upper-class fashion, as though simply sticking a feather in one's cap would transform the wearer into a noble. Professor of fashion studies Peter McNeil claims that the British were insinuating that the colonists were lower-class men who lacked masculinity, emphasizing that the American men were womanly.

The song was a pre-Revolutionary War song originally sung by British military officers to mock the disheveled, disorganized colonial "Yankees" with whom they served in the French and Indian War. It was written around 1755 by British Army surgeon Dr. Richard Shuckburgh while campaigning in upper New York, and the British troops sang it to make fun of their stereotype of the American soldier as a Yankee simpleton who thought that he was stylish if he simply stuck a feather in his cap. It was also popular among the Americans as a song of defiance, and they added verses to it that mocked the British troops and hailed George Washington as the Commander of the Continental army. By 1781, Yankee Doodle had turned from being an insult to being a song of national pride.

According to one account, Shuckburgh wrote the original lyrics after seeing the appearance of Colonial troops under Colonel Thomas Fitch, the son of Connecticut Governor Thomas Fitch. According to Etymology Online, "the current version seems to have been written in 1776 by Edward Bangs, a Harvard sophomore who also was a Minuteman." He wrote a ballad with 15 verses which circulated in Boston and surrounding towns in 1775 or 1776.

A bill was introduced to the House of Representatives on July 25, 1999 recognizing Billerica, Massachusetts as "America's Yankee Doodle Town". After the Battle of Lexington and Concord, a Boston newspaper reported:

Upon their return to Boston [pursued by the Minutemen], one [Briton] asked his brother officer how he liked the tune now, — "Dang them", returned he, "they made us dance it till we were tired" — since which Yankee Doodle sounds less sweet to their ears.

The earliest known version of the lyrics comes from 1755 or 1758, as the date of origin is disputed:

Brother Ephraim sold his Cow
And bought him a Commission;
And then he went to Canada
To fight for the Nation;

But when Ephraim he came home
He proved an arrant Coward,
He wouldn't fight the Frenchmen there
For fear of being devoured.

The sheet music which accompanies these lyrics reads, "The Words to be Sung through the Nose, & in the West Country drawl & dialect." The tune also appeared in 1762 in one of America's first comic operas The Disappointment, with bawdy lyrics about the search for Blackbeard's buried treasure by a team from Philadelphia. An alternate verse that the British are said to have marched to is attributed to an incident involving Thomas Ditson of Billerica, Massachusetts. British soldiers tarred and feathered Ditson because he attempted to buy a musket in Boston in March 1775; he evidently secured one eventually, because he fought at Concord. For this reason, the town of Billerica is called the home of Yankee Doodle:

Yankee Doodle came to town,
For to buy a firelock,
We will tar and feather him,
And so we will John Hancock.

Another pro-British set of lyrics believed to have used the tune was published in June 1775 following the Battle of Bunker Hill:

The seventeen of June, at Break of Day,
The Rebels they supriz'd us,
With their strong Works, which they'd thrown up,
To burn the Town and drive us.

Yankee Doodle was played at the British surrender at Saratoga in 1777. A variant is preserved in the 1810 edition of Gammer Gurton's Garland: Or, The Nursery Parnassus, collected by Francis Douce:

Yankey Doodle came to town,
How do you think they serv'd him?
One took his bag, another his scrip,
The quicker for to starve him.

The full version of the song as it is known today:

Yankee Doodle went to town
A-riding on a pony,
Stuck a feather in his cap
And called it macaroni.

Father and I went down to camp,
Along with Captain Gooding,
And there we saw the men and boys
As thick as hasty pudding.

And there we saw a thousand men
As rich as Squire David,
And what they wasted every day,
I wish it could be savèd.

The 'lasses they eat every day,
Would keep a house a winter;
They have so much, that I'll be bound,
They eat it when they've a mind to.

And there I see a swamping gun
Large as a log of maple,
Upon a deuced little cart,
A load for father's cattle.

And every time they shoot it off,
It takes a horn of powder,
And makes a noise like father's gun,
Only a nation louder.

I went as nigh to one myself
As 'Siah's underpinning;
And father went as nigh again,
I thought the deuce was in him.

Cousin Simon grew so bold,
I thought he would have cocked it;
It scared me so I shrinked it off
And hung by father's pocket.

And Cap'n Davis had a gun,
He kind of clapt his hand on't
And stuck a crooked stabbing iron
Upon the little end on't

And there I see a pumpkin shell
As big as mother's basin,
And every time they touched it off
They scampered like the nation.

I see a little barrel too,
The heads were made of leather;
They knocked on it with little clubs
And called the folks together.

And there was Cap'n Washington,
And gentle folks about him;
They say he's grown so 'tarnal proud
He will not ride without 'em.

He got him on his meeting clothes,
Upon a slapping stallion;
He sat the world along in rows,
In hundreds and in millions.

The flaming ribbons in his hat,
They looked so tearing fine, ah,
I wanted dreadfully to get
To give to my Jemima.

I see another snarl of men
A-digging graves, they told me,
So 'tarnal long, so 'tarnal deep,
They 'tended they should hold me.

It scared me so, I hooked it off,
Nor stopped, as I remember,
Nor turned about till I got home,
Locked up in mother's chamber.

During the aftermath of the Siege of Yorktown, the surrendering British soldiers looked only at the French soldiers present, refusing to pay the American soldiers any heed. The Marquis de Lafayette was outraged, and ordered his band to play ‘Yankee Doodle’ in response to taunt the British. Upon doing so, the British soldiers at last looked upon the victorious Americans.

Songs set to the tune to this song

All content from Kiddle encyclopedia articles (including the article images and facts) can be freely used under Attribution-ShareAlike license, unless stated otherwise. Cite this article:
Yankee Doodle Facts for Kids. Kiddle Encyclopedia.