Kids Encyclopedia Facts
This page is about political and social developments, and the origin and aftermath of the war. For military actions, see American Revolutionary War. 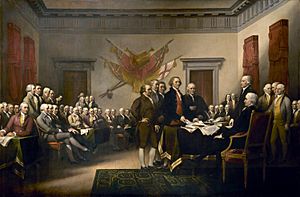 The American Revolution is the series of events, ideas, and changes that resulted in the political separation of thirteen colonies in North America from the British Empire and the creation of the United States of America. The American Revolutionary War (1775–1783) was one part of the revolution, but the revolution began before the first shot was fired at Lexington and Concord and continued after the British surrender at Yorktown. "The Revolution was effected before the War commenced," wrote John Adams. "The Revolution was in the minds and hearts of the people."

The exact nature and extent of the revolution is a matter of interpretation. It is generally agreed that the revolution originated around the time of the French and Indian War (1754–1763), and ended with the election of George Washington as the first President of the United States in 1789. Beyond that, interpretations vary. At one end of the spectrum is the view that the American Revolution was not revolutionary at all, that it did not radically transform colonial society, but simply replaced a distant government with a local one. The opposite view is that the American Revolution was a unique and radical event, producing significant changes that had a profound impact on world history. Most current interpretations fall somewhere in between these two positions. 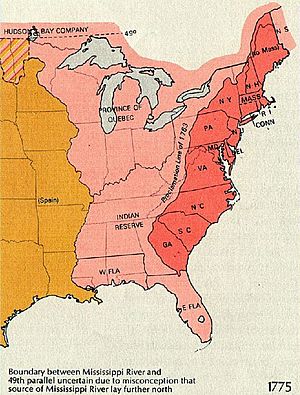 Before the Revolution: The 13 colonies are in red, the pink area was claimed by Great Britain after the French and Indian War, and the orange region was claimed by Spain. Note that this map does not show the bulk of British North America of that time.

In the early 1760s, Great Britain possessed a vast empire on the North American continent. In addition to the thirteen British colonies, victory in the Seven Years' War had given Great Britain claim over New France (Canada), Spanish Florida, and the Native American lands east of the Mississippi River. A war against France's former Indian allies - Pontiac's Rebellion - had, if not conquered, at least pacified the western frontier. Most white colonists in America considered themselves loyal subjects of the British Crown, with the same rights and obligations as people in Britain.

The Great Awakening was the American extension to the earlier religious revivals in Europe. It called into question the authority of established religious institutions, especially, but not exclusively, the Church of England. The revival placed emphasis on individual conscience and experience as the source of value in religious experience.

After the French and Indian War and Pontiac's Rebellion, newly crowned King George III sought to overhaul his expansive North American possessions. In order to make the Empire more stable and profitable, new economic and land distribution policies were implemented. Colonial resentment of these new policies grew steadily throughout the decade, and had a significant impact on the emergence of the American Revolution. 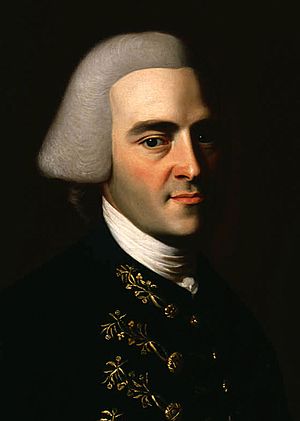 The British national debt had risen to alarming levels during the war years and so in 1760 the Crown began a series of economic initiatives designed to extract more revenue from the colonies. These policies were justifiable, the reasoning went, because the colonists were enjoying the benefits of the peace that had been won.

In theory, Great Britain already regulated the economies of the colonies through the Navigation Acts, but widespread evasion of these laws had long been tolerated. Now, through the use of open-ended search warrants (Writs of Assistance), strict enforcement became the practice. In 1761, Massachusetts lawyer James Otis argued that the writs violated the constitutional rights of the colonists. He lost the case, but John Adams later wrote, "American independence was then and there born."

In 1764, British Prime Minister George Grenville's Sugar Act and Currency Act created economic hardship in the colonies. Protests led to the boycott of British goods, and to the emergence of the popular slogan "no taxation without representation," in which colonists argued that only their colonial assemblies, and not Parliament, could levy taxes on them. Committees of correspondence were formed in the colonies to coordinate resistance. In previous years, the colonies had shown little inclination towards collective action. Grenville's policies were bringing them together.

A milestone in the Revolution occurred in 1765, when Grenville passed the Stamp Act as a way to finance the quartering of troops in North America. The Stamp Act required all legal documents, permits, commercial contracts, newspapers, pamphlets, and playing cards in the colonies to carry a tax stamp.

Colonial protest was widespread. Secret societies known as the Sons of Liberty were formed in every colony, and used propaganda, intimidation, and mob violence to prevent the enforcement of the Stamp Act. The furor culminated with the Stamp Act Congress, which sent a formal protest to Parliament in October of 1765. Parliament responded by repealing the Stamp Act, but pointedly declared its legal authority over the colonies “in all cases whatsoever.” 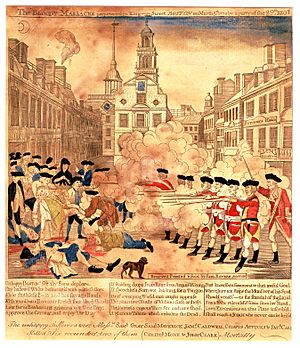 This exaggerated depiction of the "Boston Massacre" by Paul Revere was designed to inflame opposition to the military occupation of Boston.

The sequel was not long in coming. In 1767, Parliament passed the Townshend Acts, placing taxes on a number of common goods imported into the colonies, including glass, paint, lead, paper, and tea. Colonial leaders organized boycotts of these British imports. The Liberty, a ship belonging to colonial merchant John Hancock, was suspected of smuggling and seized by customs officials in Boston on June 10, 1768. Angry protests on the street led customs officials to report to London that Boston was in a state of insurrection.

British troops began to arrive in Boston in October of 1768. Tensions continued to mount, culminating in the "Boston Massacre" on March 5, 1770, when British soldiers of the 29th Regiment of Foot fired into an angry mob, killing five. Revolutionary agitators like Samuel Adams used the event to stir up popular resistance, but after the trial of the soldiers, who were defended by John Adams, tensions diminished.

The Townshend Acts were repealed in 1770. However, the British government had left one tax from the Townshend Acts in place as a symbolic gesture of their right to tax the colonies—the tax on tea. For the revolutionaries, who stood firm on the principle that only their colonial representatives could levy taxes on them, it was still one tax too many.

The Proclamation of 1763 sought to limit the conflicts between Native Americans and the English settlers by restricting settlement west of the Appalachian Mountains. However, groups of settlers, led for example by Daniel Boone, continued to move into the region beyond the Proclamation Line and clashed violently with the Shawnees and other peoples inhabiting the area. Furthermore, the Quebec Act of 1774 extended Quebec's boundaries to the Ohio River, reestablished French civil law, and instituted toleration for Roman Catholics in that territory. 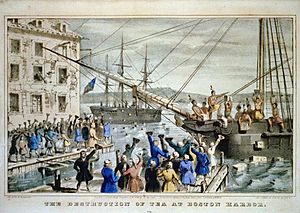 This 1846 lithograph has become a classic image of the Boston Tea Party. 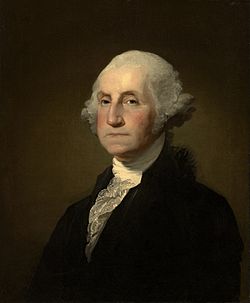 The American revolutionaries, known as Patriots (or Whigs or rebels), included many shades of opinion. Alexander Hamilton, John Jay, and George Washington represented a socially conservative faction that would later take shape as the Federalist party and are traditionally characterized as preoccupied with preserving the wealth and power of the "better sorts" of colonial society. Thomas Jefferson, James Madison, Benjamin Franklin and Thomas Paine are usually portrayed as representing the less economically affluent side of society, and political equation.

A great many American colonists remained loyal to the British Crown; these were known as Loyalists (or Tories, or King's men). Loyalists were often of the same well-to-do social circle that produced the right wing of the Patriots (take for example Thomas Hutchinson); however, the Scottish highlanders of the Mohawk Valley and the frontiersmen of Georgia included a large number of poorer King's men. After the war, United Empire Loyalists became a central component of the populations of the Abaco islands (in the Bahamas), the Canadian provinces of New Brunswick and Ontario, and Freetown, Sierra Leone.

Thomas Paine produced a pamphlet entitled Common Sense arguing that the only solution to the problems with Britain would be republicanism and independence. 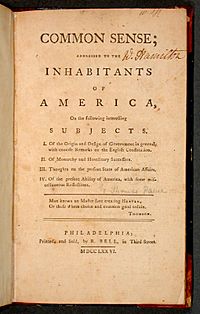 America after the war

The American Revolution entrenched several noteworthy innovations: the separation of church and state, which ended the special privileges of the Anglican Church in the South and the Congregationalist Church in New England; a discourse of liberty, individual rights and equality which would prove highly appealing in Europe; the idea that government should be by consent of the governed (including the right of rebellion against tyranny); the delegation of power through written constitutions; and the notion that colonial peoples of the Americas could become self-governing nations in their own rights.

The American Revolution was the first wave of the Atlantic Revolutions that would also take hold in the French Revolution, the Haitian Revolution, and the Latin American wars of liberation. Aftershocks would also be felt in Ireland in the 1798 rising, in the Polish-Lithuanian Commonwealth, and in the Netherlands.

The Revolution had a strong immediate impact in Great Britain, Ireland, the Netherlands, and France. Many British and Irish Whigs had been openly indulgent to the Patriots in America, and the Revolution was the first lesson in politics for many European radicals who would later take on active roles during the era of the French Revolution.

All content from Kiddle encyclopedia articles (including the article images and facts) can be freely used under Attribution-ShareAlike license, unless stated otherwise. Cite this article:
American Revolution Facts for Kids. Kiddle Encyclopedia.