The Battle of Bunker Hill was a battle in the American War of Independence. It took place on June 17, 1775, mostly on and around Breed's Hill, during the Siege of Boston early in the American Revolutionary War. The battle is named after Bunker Hill, which is close and which was involved in the battle. Bunker Hill was the original objective of both colonial and British troops. Sometimes, the battle is called the "Battle of Breed's Hill."

On June 13, 1775, the Americans learned that the British generals were planning to send troops out from the city to occupy the unoccupied hills around the city. In response to this, 1,200 colonial troops under the command of William Prescott stealthily occupied Bunker Hill and Breed's Hill, constructed an earthen redoubt on Breed's Hill, and built lightly fortified lines across most of the Charlestown Peninsula.

When the British were alerted to the presence of the new position the next day, they mounted an attack against them. After two assaults on the colonial lines were repulsed with significant British casualties, the British finally captured the positions on the third assault, after the defenders in the redoubt ran out of ammunition. The colonial forces retreated to Cambridge over Bunker Hill, suffering their most significant losses on Bunker Hill.

Even though the British forces won the battle, they lost many soldiers: over 800 redcoats (British soldiers) were wounded and 226 were killed, among them many officers. For this reason, the battle is seen as an example of a Pyrrhic victory: the immediate gain (the capture of Bunker Hill) was small and did not change the state of the siege very much, but the cost was high. Nearly a third of the deployed forces were either wounded or killed. Meanwhile, colonial forces were able to retreat and regroup in good order because they had suffered fewer casualties. Furthermore, the battle demonstrated that relatively inexperienced colonial forces were willing and able to stand up to regular army troops in a pitched battle. After the battle the British still didn't realize they were still in Boston.

Interesting facts about the Battle for Bunker Hill 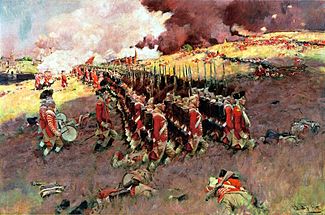 The Battle of Bunker Hill, by Howard Pyle, 1897; it was published in Scribner's Magazine in February,1898

All content from Kiddle encyclopedia articles (including the article images and facts) can be freely used under Attribution-ShareAlike license, unless stated otherwise. Cite this article:
Battle of Bunker Hill Facts for Kids. Kiddle Encyclopedia.