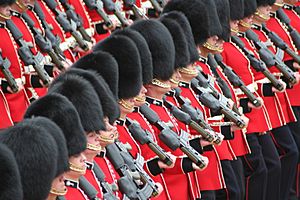 Welsh Guards in the Trooping the Colour during the Queen's Official Birthday, 2007

Red coat (also spelled as "redcoat") or scarlet tunic is a military garment used widely, though not exclusively worn, by most regiments of the British Army, Royal Marines, and some colonial units within the British Empire, from the 17th to the 20th centuries. The scarlet tunic continues to be used into the 21st century, with several armed forces of the Commonwealth of Nations adopting them as their full dress and mess dress uniforms. The term "redcoat" may have originated in 16th century Tudor Ireland as a derogatory term for the British, as British soldiers in Lord Lieutenant of Ireland's army wore red coats, the first time British soldiers collectively had a red uniform. The term was then brought to America and Europe by Irish emigrants.

From the mid-17th century to the 19th century, the uniform of most British soldiers (apart from artillery, rifles and light cavalry) included a madder red coat or coatee. From 1873 onwards, the more vivid shade of scarlet was adopted for all ranks, having previously been worn only by officers, sergeants and all ranks of some cavalry regiments.

All content from Kiddle encyclopedia articles (including the article images and facts) can be freely used under Attribution-ShareAlike license, unless stated otherwise. Cite this article:
Red coat (military uniform) Facts for Kids. Kiddle Encyclopedia.