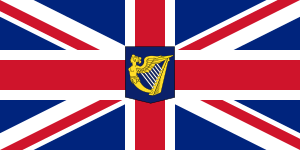 Official flag of the Lord Lieutenant of Ireland

The Lord Lieutenant of Ireland (plural: Lords Lieutenant) is the name of a political office (job). It was the representative of the King and head of the Irish executive (government) between 1171 and 1922. The term is always pronounced as 'Lord Lef-tenant of Ireland'.

Other words used for this office were Judiciar in the early mediaeval period and Lord Deputy as late as the 17th century. The people in this job were often also called viceroy, from the French vice roi or deputy king.

In the Middle Ages some Lord Lieutenants had been Irish noblemen. After that only noblemen from Great Britain worked in this job.

The King's representative had a number of different roles. He was

The structure of the government

The Lord Lieutenant was helped to govern by the Irish Privy Council. This was a group of people chosen to be on the Council. Some inherited their seat. They usually met in the Council Chamber in Dublin Castle.

The main politicians were:

Lords Lieutenant stayed in power until the British Government/the King wanted them to leave.

Two Lords Lieutenant, Lord Hartington and the Duke of Portland, went from Dublin Castle to 10 Downing Street as Prime Minister of Great Britain, in 1756 and 1783 respectively. At other times, the post was used to move politicians that were no longer wanted in London out of the way.

By the mid-to-late 19th century the post was no longer very important. The Chief Secretary for Ireland had become more important in ruling the country than the Lord Lieutenant.

The Lords Lieutenant then only lived in the Castle during the Social Season (early January to St. Patrick's Day, 17 March).

The office of Lord Lieutenant, like the British government in Ireland, was generally unpopular.

From the early 19th century, calls were made frequently to get rid of the office. However, the office survived right down until the end of British rule in most of Ireland.

All content from Kiddle encyclopedia articles (including the article images and facts) can be freely used under Attribution-ShareAlike license, unless stated otherwise. Cite this article:
Lord Lieutenant of Ireland Facts for Kids. Kiddle Encyclopedia.