Kids Encyclopedia Facts
This page is about a group of people who govern. For the furniture, see Cupboard. 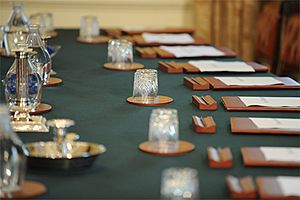 The Cabinet table in the United Kingdom.

A Cabinet is a group of important people in a government, who normally represent the head of government. It is also known as the Council of Ministers or the Executive Council. They are part of the executive branch of government. People in the cabinet are called ministers, and they do different things, such as look after the environment.

Many years ago the cabinets were called Privy Councils. The cabinet of today came about during the time that George I and George II were Kings of England.

In some European countries, the term "cabinet" is used to mean the assistants of an important politician.

In the UK and some Commonwealth countries, the Shadow Cabinet are the leaders of the main opposition party in a parliament.

All content from Kiddle encyclopedia articles (including the article images and facts) can be freely used under Attribution-ShareAlike license, unless stated otherwise. Cite this article:
Cabinet Facts for Kids. Kiddle Encyclopedia.