Barack Hussein Obama II (born August 4, 1961) is an American politician. He was the 44th President of the United States and the first African-American to hold the office. He is a Democrat. Obama won the 2008 United States presidential election, on November 4, 2008. He was inaugurated on January 20, 2009.

As president, he slowly ended US participation in the Iraq War, having prepared the country to defend itself. He also signed the Patient Protection and Affordable Care Act (often called "Obamacare") which changed many health care laws. He also enacted many acts to create public works jobs to help the economy. He became the first president to openly express support for gay marriage, proposed gun control and opened diplomatic relations with Cuba. 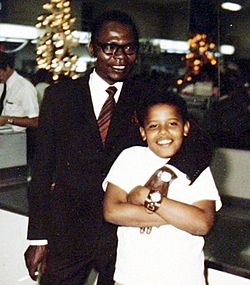 Obama was born on August 4, 1961 in Kapiʻolani Medical Center for Women and Children (called Kapiʻolani Maternity & Gynecological Hospital in 1961) in Honolulu, Hawaii and is the first President to have been born in Hawaii. His father was a black exchange student from Kenya named Barack Obama Sr. He died in a motorcycle accident in Kenya in 1982. His mother was a white woman from Kansas named Ann Dunham, who was an anthropologist and died from cancer. His mother married Barack Obama Sr. in 1961 and divorced him in 1964. His stepfather was from Indonesia named Lolo Soetoro after his mother married him in 1965. She divorced in 1980. He spent most of his childhood in Hawaii and Chicago, Illinois, although he lived in Indonesia with his mother and stepfather from age 6 to age 10. He moved back to Hawaii after that to live with his grandparents.

He started college at Occidental College in Los Angeles, and graduated from Columbia University in New York City. After taking time off to community organize, Obama went to law school at Harvard University. After law school, Obama worked for a law firm. The law firm sued companies who fired people, and sued the government claiming that some black people were prevented from voting.

While he was Illinois state senator, he wrote a law that required police to keep records on the race of people they stopped. The law that he wrote also forced police to videotape when they talked to people they suspect of murder. He taught law part-time at the University of Chicago Law School. Judge and political teacher Abner J. Mikva taught Obama politics and became his mentor.

Obama ran for the U.S. Senate. While running for Senate, John Kerry asked him to speak at the Democratic National Convention. He spoke on television. He was a U.S. Senator from 2005 to 2008.

Obama won the presidential election of 2008.

Barack Obama's presidential campaign for the White House started in early June 2008 when he defeated Hillary Clinton in the 2008 Democratic primaries. Hillary Clinton was favored to win but Obama won many smaller state caucuses (local party elections) by having a lot of volunteers. He decided not to accept government money for his campaign so that he could accept more money from people. He raised the most amount of money ever for a presidential campaign.

During the campaign, some people said that Obama's friends were Tony Rezko, a landlord, and former member of the Weather Underground Bill Ayers; Obama said that they were not his friends. Obama also had trouble when his minister at church, Jeremiah Wright, was videotaped criticizing America. During the campaign, Obama said that his opponent, Republican candidate John McCain, was just like George W. Bush, something that John McCain said was not true.

He defeated McCain in the election on November 4 by a wide electoral majority of 365 to 173, meaning that he won the most votes in enough states to send 365 people to officially elect him. The popular vote (based on the total number of votes across the country) was closer, with Obama winning 53%, McCain 46%. 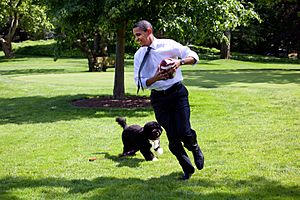 Obama and the family presidential dog, Bo, running on the White House grounds. Bo died in 2021.

Obama has been married to Michelle Obama since 1992. She has a Bachelor of Arts degree from Princeton University, and also a law degree from Harvard Law School. She worked as a lawyer. They have two daughters, Malia Ann, who was born in 1998 and Natasha ("Sasha"), born in 2001. They lived in Chicago, but moved into the White House on January 20, 2009.

Obama promised his daughters that the family would get a dog if he was elected President. In April 2009, Senator Ted Kennedy,the brother of former President John F. Kennedy, gave Obama one of his dogs, a Portuguese water dog named Bo.

Obama has a half sister who is a teacher in Hawaii. His father died from a car accident in Africa. His mother died of cancer. His maternal grandmother died just before Obama won the election to become President. 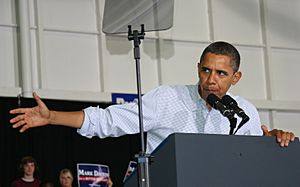 Obama talking in 2010 at the University of Minnesota

Obama became President of the United States on January 20, 2009. The United States was battling a tough recession. He asked Congress to spend an extra $787 billion ($787,000,000,000) to try to end the recession. He called the plan the stimulus bill. The stimulus bill funded many road projects, gave money to schools, gave tax credits to many Americans, and funded many science and research projects.

Obama continued the financial bailout that George W. Bush started, giving billions of dollars to car companies and banks so that they would not go bankrupt. He signed an act written by Barney Frank and Chris Dodd which would regulate Wall Street (the financial industry) to try to prevent another recession like this from happening again. Obama signed the Patient Protection and Affordable Care Act which would bring health care reform to the United States, which he said would change the system so that more people can afford health care.

In foreign policy, Obama made a plan to slowly withdraw troops from Iraq, ending the War in Iraq by the end of 2011, while adding more troops to Afghanistan to help the United States win the War in Afghanistan. He also decided that the USA should help in the war against Libya. He has said several times that he wants to improve U.S. relations with the Muslim world.

Obama received the 2009 Nobel Peace Prize on October 9, 2009. He noted that his efforts were humble, but he donated the prize money to several charities.

Although his popularity was very high (around 70% approval) when he entered office, his approval ratings fell to 45% percent during the year of 2010. He has received a lot of criticism from Republicans, conservatives, libertarians, and members of the Tea Party because they believe that the federal government is becoming too big and spending too much money and that his programs are not the best for the country.

With rising deficits (the amount of money the government borrows each month) under his administration, he has called for taxes to be increased on the rich and wealthy Americans, who can afford to pay them. He has criticized his Republican opponents for wanting to cut welfare benefits for the poor and needy rather than raising taxes to help pay down the debt. He also signed the Don't Ask Don't Tell Repeal Act of 2010 in 2010 which since 1993 had prevented openly gay men and openly lesbian women from serving in the army.

Obama has started the ending of the Iraq War and continued the war on terror which resulted in the death of Osama bin Laden on May 2, 2011. Obama has started a no-fly-zone policy on Libya which ended the civil war in October 2011 with the killing of Muammar al-Gaddafi. On May 9, 2012, he became the first sitting US President to openly support legalizing same-sex marriage.

On December 21, 2012, Obama nominated John Kerry for United States Secretary of State during his second term. Kerry was sworn in on February 1, 2013.

Before his second term began and still continues, there has been debating of guns because of the shooting in Newtown, Connecticut that happened on December 14, 2012, as well as shootings in the past.

He visited South Africa on late June 2013. Prior to visiting South Africa, he visited Senegal. He visited Robben Island, where Mandela was imprisoned. He did not meet with Nelson Mandela. 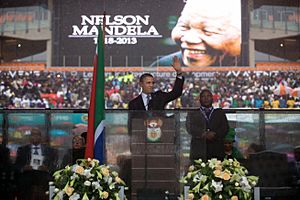 On April 4, 2011 Obama declared that he would stand for re-election for a second term in 2012 in a video titled "It Begins with Us" that he posted on his website and filed election papers with the Federal Election Commission. He was officially nominated for his party's Presidential choice on September 6, 2012. Mitt Romney was officially nominated as his opponent by the Republican party on August 30, 2012. While the election results were very close, Obama easily won the electoral college votes he needed to win a second term. Obama and Romney spent more than $2 billion on advertising during the election campaign.

The start of his second term in 2014, had a few setbacks. With the NSA, people were upset at the Obama Administration that the government was possibly listening to their phone calls. His party (the Democrats) also lost the Congressional elections. Because of disagreements between Democrats and Republicans in Congress, neither side is getting anything done and Obama has resulted in using his Executive Order (his power as president) to help reform things like the immigration system.

He's also supported increasing the minimum wage, requiring women to be paid the same as men at the same job and has called for the first 2 years of college to be fully government-funded for students who study full-time and get good grades. 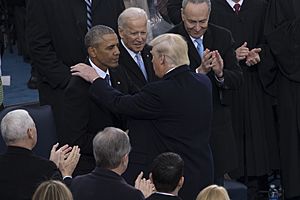 Obama, with Joe Biden and Donald Trump at the latter's inauguration on January 20, 2017

As it is not possible for a person to be president for three terms, Obama could not run for president again. He was replaced by Republican Donald Trump in early 2017. He left office with a 60% approval rating.

Even though he is not the president anymore, Obama still owns a house in Washington, D.C.

Obama and his wife, Michelle, spend time making speeches and attending events. They also run a charity called the Obama Foundation, and own Higher Ground Productions, a company which makes movies. The company was hired by Netflix to make documentaries. One of their documentaries, American Factory, won an Academy Award for being the best documentary of 2019.

He is also working on a presidential memoir.

A 2018 survey of historians by the American Political Science Association ranked Obama the 8th-greatest American President. 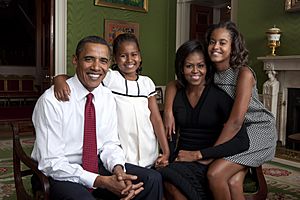 All content from Kiddle encyclopedia articles (including the article images and facts) can be freely used under Attribution-ShareAlike license, unless stated otherwise. Cite this article:
Barack Obama Facts for Kids. Kiddle Encyclopedia.