Medicaid is health insurance given to people with low income that is paid by the states and the federal government. Medicaid will be expanded so that more people can use it. States can choose if they want to expand Medicaid. If they choose to do this, then the federal government will pay for the majority of the cost of Medicaid. 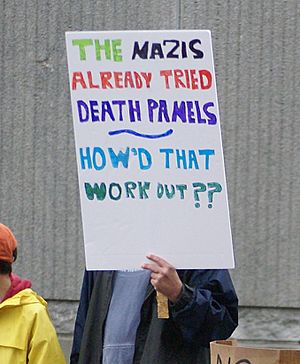 On May 4, 2017, the American Health Care Act of 2017 (AHCA) was passed narrowly by the United States House of Representatives with a vote of 217 to 213, sending the bill to the Senate for voting This is the second time the AHCA was voted in the House as the first version was not approved by the House in March 2017. President Donald Trump supported the passage of the AHCA and supports the idea of replacing and removing Obamacare.

All content from Kiddle encyclopedia articles (including the article images and facts) can be freely used under Attribution-ShareAlike license, unless stated otherwise. Cite this article:
Affordable Care Act Facts for Kids. Kiddle Encyclopedia.