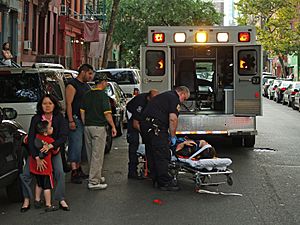 Emergency Medical Technician treating a woman who has collapsed in the street in New York.

An emergency is a situation in which a risk to health, life, property or environment is about to happen. Most emergencies need quick attention to prevent it from becoming worse. Even though some emergencies are easy to see, like a natural disaster, many smaller incidents need the opinion of someone who is watching in order to decide whether it is really an emergency. The exact definition of an emergency, the agencies involved and the rules followed, depend on the jurisdiction, and this is usually set by the government, whose agencies (emergency services) are responsible for emergency planning and handling.

An incident, to be an emergency, conforms to one or more of the following: if it:

In the United States, most states mandate that a notice be printed in each telephone book that requires that someone must relinquish use of a phone line, if a person requests the use of a telephone line (such as a party line) to report an emergency. State statutes typically define an emergency as, "...a condition where life, health, or property is in jeopardy, and the prompt summoning of aid is essential."

Whilst most emergency services agree on protecting human health, life and property, the environmental impacts are not considered sufficiently important by some agencies. This also extends to areas such as animal welfare, where some emergency organisations cover this element through the "property" definition, where animals owned by a person are threatened (although this does not cover wild animals). This means that some agencies do not mount an "emergency" response where it endangers wild animals or environment, though others respond to such incidents (such as oil spills at sea that threaten marine life). The attitude of the agencies involved is likely to reflect the predominant opinion of the government of the area.

Many emergencies cause an immediate danger to the life of people involved. This can range from emergencies affecting a single person, such as the entire range of medical emergencies including heart attacks, strokes, cardiac arrest and trauma, to incidents that affect large numbers of people such as natural disasters including tornadoes, hurricanes, floods, earthquakes, mudslides and outbreaks of diseases such as cholera, Ebola, and malaria.

Most agencies consider these the highest priority emergency, which follows the general school of thought that nothing is more important than human life.

Some emergencies are not necessarily immediately threatening to life, but might have serious implications for the continued health and well-being of a person or persons (though a health emergency can subsequently escalate to life-threatening).

The causes of a health emergency are often very similar to the causes of an emergency threatening to life, which includes medical emergencies and natural disasters, although the range of incidents that can be categorised here is far greater than those that cause a danger to life (such as broken limbs, which do not usually cause death, but immediate intervention is required if the person is to recover properly). Many life emergencies, such as cardiac arrest, are also health emergencies.

Dangers to the environment

Some emergencies do not immediately endanger life, health or property, but do affect the natural environment and creatures living within it. Not all agencies consider this a genuine emergency, but it can have far-reaching effects on animals and the long term condition of the land. Examples would include forest fires and marine oil spills. 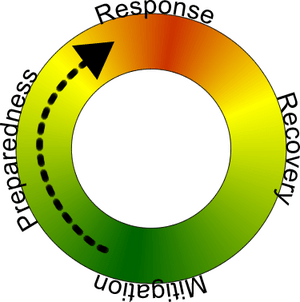 A graphic representation of the four phases in emergency management.

Agencies across the world have different systems for classifying incidents, but all of them serve to help them allocate finite resource, by prioritising between different emergencies.

The first stage of any classification is likely to define whether the incident qualifies as an emergency, and consequently if it warrants an emergency response. Some agencies may still respond to non-emergency calls, depending on their remit and availability of resource. An example of this would be a fire department responding to help retrieve a cat from a tree, where no life, health or property is immediately at risk.

Following this, many agencies assign a sub-classification to the emergency, prioritising incidents that have the most potential for risk to life, health or property (in that order). For instance, many ambulance services use a system called the Advanced Medical Priority Dispatch System (AMPDS) or a similar solution. The AMPDS categorises all calls to the ambulance service using it as either 'A' category (immediately life-threatening), 'B' Category (immediately health threatening) or 'C' category (non-emergency call that still requires a response). Some services have a fourth category, where they believe that no response is required after clinical questions are asked.

Other systems (especially as regards major incidents) use objective measures to direct resource. Two such systems are SAD CHALET and ETHANE, which are both mnemonics to help emergency services staff classify incidents, and direct resource. Each of these acronyms helps ascertain the number of casualties (usually including the number of dead and number of non-injured people involved), how the incident has occurred, and what emergency services are required.

Agencies involved in dealing with emergencies

Most developed countries have a number of emergency services operating within them, whose purpose is to provide assistance in dealing with any emergency. They are often government operated, paid for from tax revenue as a public service, but in some cases, they may be private companies, responding to emergencies in return for payment, or they may be voluntary organisations, providing the assistance from funds raised from donations.

In some countries or regions, two or more of these services may be provided by the same agency (e.g. the fire service providing emergency medical cover), and under different conditions (e.g. publicly funded fire service and police, but a private ambulance service)

There may also be a number of secondary emergency services, which may be a part of one of the core agencies, or may be separate entities who assist the main agencies. This can include services providing specialist rescue (such as mountain rescue or mine rescue), bomb disposal or search and rescue.

Most countries have an emergency telephone number, also known as the universal emergency number, which can be used to summon the emergency services to any incident. This number varies from country to country (and in some cases by region within a country), but in most cases, they are in a short number format, such as 911 (United States and many parts of Canada), 999 (United Kingdom), 112 (Europe) and 000 (Australia).

The majority of mobile phones also dial the emergency services, even if the phone keyboard is locked, or if the phone has an expired or missing SIM card, although the provision of this service varies by country and network.

All content from Kiddle encyclopedia articles (including the article images and facts) can be freely used under Attribution-ShareAlike license, unless stated otherwise. Cite this article:
Emergency Facts for Kids. Kiddle Encyclopedia.