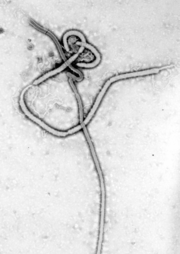 Ebola virus is a very dangerous virus. It belongs to the Filoviridae family and is responsible for a severe disease characterized by the sudden onset of hemorrhagic fever accompanied by other nonspecific signs and symptoms. "Hemorrhagic" means that the victim will bleed a lot, inside and outside their body. The virus attacks almost every organ and tissue of the human body resulting in multi-organ dysfunction. Out of every 10 people who get Ebola, on average five to nine die. There are four kinds of Ebola virus that can cause the disease. The virus was first found in Sudan. It is found in Africa, with very few cases in Europe and the United States.

Scientists have not yet found a vaccine for Ebola, but efforts are underway.

All content from Kiddle encyclopedia articles (including the article images and facts) can be freely used under Attribution-ShareAlike license, unless stated otherwise. Cite this article:
Ebola virus Facts for Kids. Kiddle Encyclopedia.